McGary, Warren to Announce This Week 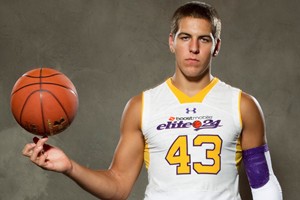 Two of the biggest names left on the 2012 recruiting board will end the speculation this week when Brewster Academy teammates Mitch McGary and T.J. Warren name their colleges. The 6-foot-10 McGary will announce Thursday for either Michigan, Duke or Florida, and his father confirmed Mitch will announce on ESPN. “Yes he will,” Tim McGary said by text. ESPNU has a “Recruiting Nation” show slated for 5 p.m. EST Thursday. Both ESPN and Scout are already calling McGary to Michigan. “I think the kid’s getting kind of burnt out with it,” one college assistant told ESPN.com’s Dave Telep. “I think the kid’s going to Michigan.” The 6-7 Warren, a Raleigh, N.C., native, will announce Wednesday for N.C. State or Georgetown. “I would assume, and I really don’t know for sure, that T.J. would like to go to one of those schools that are close to his home in N.C.,” McGary wrote in his blog entry on ESPN.com. “That’s just my guess.” Rodney Purvis and Tyler Lewis are already committed to N.C. State, and Lewis knows Warren would be a great addition. “T.J. would add a big wing that is one of the best scorers in our class,” Lewis told Fivestarbasketball. “He can score in a variety of ways and has one of the best jump shots in the country.”