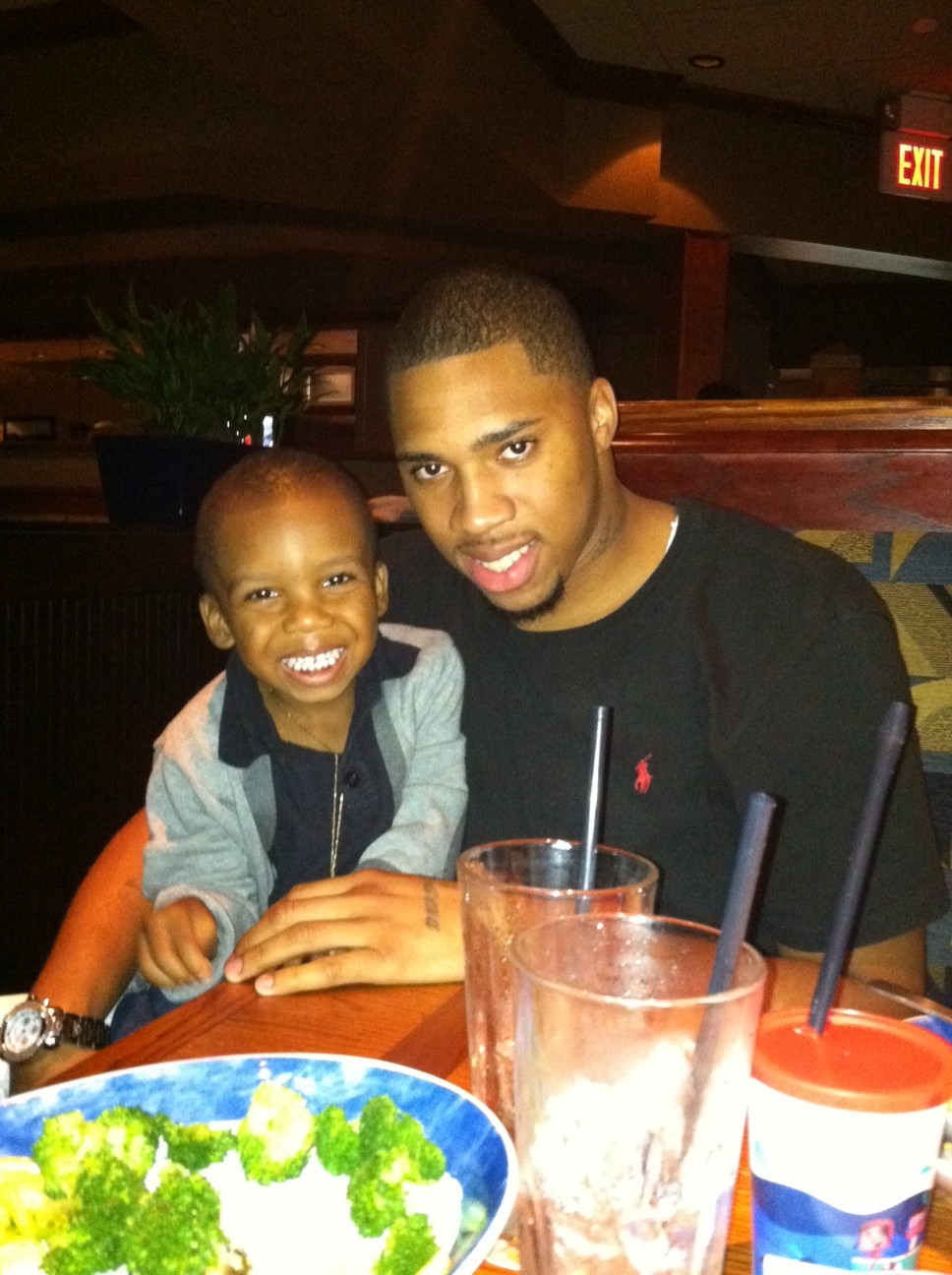 NEW ROCHELLE, N.Y. — Mike Glover is a huge hit with the Iona College cheerleaders. Not 24-year-old Mike Glover Sr., the 6-foot-6, 230-pound forward who is on the Wooden Preseason Watch List as one of the Top 50 college basketball players in the nation. No, that would be Mike Glover Jr., the two-and-half-year-old son of the Bronx native. “The cheerleaders all surround him and take pictures of a kid with a big smile on his face,” said Brian Beyrer, the Iona Associate Athletic Director for Athletic Communications. “It’s interesting how everyone knows it’s Mike Glover Jr.” As Mike Sr. enters his senior season at Iona, fatherhood has helped him focus his goals. He hopes to get the Gaels into the NCAA Tournament for the first time since 2006, and he wants to pave the way for a professional career — either in the NBA or overseas — so as to provide a stable financial future for his family. “It’s just a whole level of responsibility for him that has changed a lot,” Iona coach Tim Cluess said. “It’s not just about Mike Glover anymore, so therefore he’s taking his academics more serious. I think he’s taking his basketball more serious. He’s a little bit more focused on what’s important in his life.” LONG JOURNEY TO IONA Something of a basketball nomad, Glover has attended four colleges and three high schools. The younger brother of former St. John’s standout Anthony Glover, Mike spent three years at James Monroe High School in The Bronx, one at Boys to Men Academy in Chicago and another at the now-defunct American Christian (Pa.), where he teamed with current Sacramento Kings guard Tyreke Evans. “I basically did a whole journey around the United States of America,” Glover said last year, referring also to college stops at Seton Hall, ASA, a junior college in Brooklyn, and the College of Eastern Utah.

In the summer of 2006, Glover initially committed to then-Seton Hall coach Bobby Gonzalez while at American Christian. He arrived on campus a year later as perhaps the most heralded recruit of Gonzalez’s turbulent four-year tenure. But more than a year later, ensnared in an NCAA investigation of his academic record, Glover still hadn’t played a single game for the Pirates. For his last semester at Seton Hall, he paid his own tuition. “When I was going through the whole situation with the lawyers and in and out of meetings with the NCAA, I just felt like this school just wasn’t going to work,” Glover said in a lengthy exclusive interview with SNY.tv last week at Iona. “Maybe it wasn’t meant to be. “By me watching my brother play Big East basketball at St. John’s, I always thought that I had a chance and I had to work at it. And when I did work at it and I wound up at Seton Hall, things still wasn’t going my way. So I really just had to keep myself composed and I didn’t play in two years. I just wound up playing junior college basketball.” Glover eventually left Seton Hall in the fall of 2008 and landed at ASA. He was there when Mike Jr. was born on Jan. 8, 2009 to Alissa Carter, Glover’s girlfriend for six years and a fellow Bronx native. (He says the couple plans to get married “real soon.”) “It pretty much taught me how to be more humble and not to be easily distracted by the outside world,” Glover said of the birth of his son. “And what I mean by the outside world, I mean people always in your ear giving you bad advice. So by me having a son, it taught me a lot. It taught me to stay humble.” Still, Glover had to separate from Alissa and Mike Jr. when he left ASA for Eastern Utah. He was in Price, Utah meeting Mormons for the first time in his life when Mike Jr. turned 1. Glover averaged 17.3 points and 6.9 rebounds while helping the team finish third in the national junior college tournament in 2010. During his time at Eastern Utah, Glover committed to St. Francis of New York. But when Brian Nash abruptly resigned at St. Francis in April 2010, Glover changed course again and ultimately landed at Iona, in part because Iona assistant Jared Grasso maintains a close relationship with former American Christian coach Tony Bergeron.

In his first season at Iona last year, Glover averaged 18.4 points and 10.1 boards, becoming the first Iona player since Jeff Ruland in 1979-80 to average a double-double. He helped the Gaels reach the MAAC championship game, where they lost to St. Peter’s and missed out on the conference’s automatic bid to the NCAA Tournament. BLENDING FATHERHOOD, HOOPS & SCHOOL Now Mike Sr. and Alissa, who works as a school aide, split childcare duties while sharing an off-campus apartment near Iona. (Alissa’s grandmother also helps out with Mike Jr.) Mike Sr. wants to emulate and improve upon the experience he had with his own parents, Danny and Joanne, who worked tirelessly to provide him with a stable home life. “My pops never wanted her to work,” Mike Sr. said of his father, who has driven a truck for a recycling company for more than 25 years. “He always wanted to be the man who would come home and provide for the family.” Glover said his father would leave for work in the morning and not return until after he had gone to bed. “It got to a point where I never used to see him around,” Mike Sr. said of his father’s work schedule. By contrast, Mike Sr. tries to include Mike Jr. in his own life as much as possible. He brings the boy to practices, where he stretches with the team, all the home games and even on the road once in a while. “I try to have him at every game possible,” Mike Sr. said . “I want to always be a part of his everyday life despite that I’m always on the road. Every chance get as far as the home games and the road games, he must be there.” Cluess likes having Mike Jr. around the gym because he notices a change in the boy’s father when he is. “I think when his son is here Mike always plays harder so I like having his son here,” Cluess said. PLANNING FOR A PRO CAREER 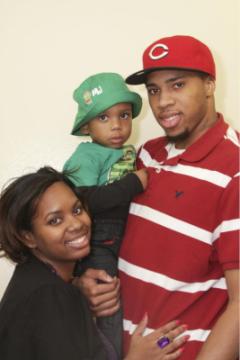 Mike Sr. knows that he can earn a paycheck playing basketball somewhere next season, and says Alissa understands their current sacrifice may soon end. “Pretty much she understands where I’m trying to go with this,” he said. “And pretty much we just have to sacrifice for another five to six months.” He added: “I want to just provide for my family making enough money to make sure that my son and his mom have nothing to worry about. “At the end of the day, I wouldn’t want her working forever because as a dad, as a father, as a man, I guess I follow my father’s trait. I wouldn’t want the woman working.” Cluess says he believes Glover has a chance to make it in the NBA if he keeps improving on a few aspects of his game. “I think he’s got a chance, he’s got a chance,” Cluess said. “He needs to continue to work hard, continue developing some parts of his game that I’ve seen some growth in the last year. “His ballhandling and attacking of the rim have really come a long way and his passing skills have come a long way. His shot has improved. He has to do it in the games to get confidence. “So he’s gotta not only look for it but get comfortable taking them where nows it’s a weapon. If he gets that down he’s definitely an NBA player.” And maybe then, a smiling Mike Jr. will be surrounded by NBA cheerleaders. (Photos courtesy Mike Glover and Iona College)