Kameron Mitchell, a 6-foot-3, 165-pound combo guard who has been compared to J.J. Redick and Teddy Dupay, has verbally pledged to Wagner after an official visit this week. “I just felt a real connection with the coaches,” Mitchell told SNY.tv, referring to head coach Dan Hurley and assistant Bobby Hurley, the former Duke star. “I feel like we can reach my full potential at Wagner. It’s just a good fit for me in all areas.” A 2012 guard out of Jacksonville (Fla.) Mandarin, Mitchell scored 30 or more points six times last season and hit 40 or more twice, including a career-high 48 against Sandalwood. “I can be a good versatile player who can knock down open shots, handle the ball and play aggressive defense,” he said. He also held an offer from Stony Brook, and had interest from North Florida and Jacksonville. MOTO TO WAKE FOREST 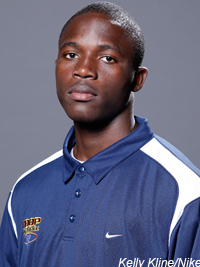 Arnaud Adala Moto, a 6-6 wing from Alexandria (Va.) Episcopal, is headed to Wake Forest. “He loved everything about Wake Forest,” his high school coach, Jim Fitzpatrick, said by text. “It is a great fit academically and socially, and there is a great opportunity to compete for playing time immediately as a freshman. “Arnaud is excited to be a part of the Class  of 2012 recruiting class, and this group has a chance to help rebuild the program. Jeff Bzdelik and Jeff Battle have done an excellent job recruiting Arnaud over the last two years.” The Rivals No. 22 small forward in the Class of 2012 also considered Florida, Miami, UCLA, Vanderbilt and Virginia Tech.

Louisville Counting on a Pair of Smiths

Big East to Expand, But Pitino Says Memphis Not Ready