NEW YORK — As he was about to serve on triple-match point Sunday at the U.S. Open, Donald Young looked at his family and friends in his player’s box and stuck out his tongue Michael Jordan-style.

When his opponent, No. 24 Juan Ignacio Chela of Argentina, smacked a forehand wide, the overflow crowd surrounding the Grandstand court let loose a wild round of applause and Young pounded his chest and did a little dance at midcourt.

“It’s him at peace and he’s finally done what he needed to do,” his mother and coach, Illona Young, told SNY.tv as she left the stadium.

“I think he was just happy, I’m happy for him,” his father, Donald Young Sr., added.

Chris Walker is one of the top prospects in the Class of 2013, and a potential pro.

The Florida native spent Saturday on the campus of the University of Florida, one of several schools he’s considering.

“It was nice,” the 6-foot-9 Walker, the No. 2 small forward in the Class of 2013, said by text. “I watched Florida work out and scrimmage and got to have a one-one-one talk with Billy D [Donovan].

“He told me they are recruiting me the hardest and I could get it done in my own state and I could come in and be an impact player.” 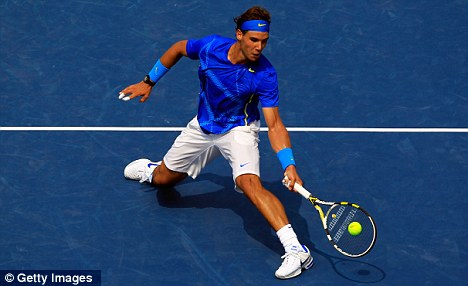 NEW YORK — For a period in the first set of their match Sunday in Arthur Ashe Stadium, it appeared that David Nalbandian might be able to pull the upset of defending U.S. Open champion Rafael Nadal.

Or at least make it interesting.

Dictating the pace of play from the baseline and attacking at net when opportunities arose, Nalbandian broke Nadal in the fifth game and served for the first set at 5-4.

“The key of the match was the first set when I had the chance to come back at 5-4 and he was serving for the set,” Nadal said.

Oklahoma, Texas Could Be Part of Pac 16

Take a look at a map of the United States and you can plainly see that Oklahoma and Texas are not anywhere near the West Coast.

Yet the two powerhouse Big 12 schools could become part of a Pac 16 as the rising tide of conference realignment rolls on.

The Oklahoman reported Saturday that Oklahoma’s “sole focus” was on leaving the Big 12 for the Pac-12.

“Schools have reached out to us,” Pac-12 Commissioner Larry Scott told reporters in Arlington, Texas, according to the New York Times. “We are not doing anything proactively, we are not initiating anything. But schools have called us.”

To hear some Seton Hall fans tell it, Kyle Anderson may be the most pivotal recruit in program history.

If the 6-foot-8 Anderson were to choose the Pirates, he would be their highest-profile recruit in a generation.

Anderson took an unofficial to the campus Thursday and came away with a positive outlook.

“The visit went well,” he said by text. “The student body was great. They showed me a lot of love. The coaches and I had a great talk.”