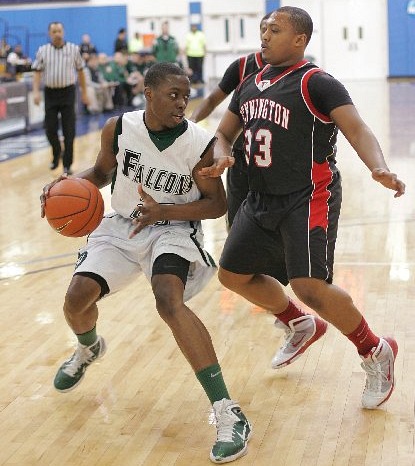 Quenton DeCosey, a 6-5, 185-pound small forward from St. Joe’s in Metuchen, has committed to Temple. “I chose Temple University mainly because of the coaching staff and the atmosphere and the distance,” DeCosey told SNY.tv. “It’s only an hour-and-a-half away.” DeCosey also had offers from Penn State, West Virginia and Virginia Tech. “I’ll be a one through three. They basically play a four-out, one-in,” he said. So just a lot of screens and curls. I can be bringing up the ball on one play and on the wing in the next play.” What does he bring to the table? According to DeCosey’s head coach at St. Joe’s, Dave Turco, a lot. “[Quenton] has tremendous upside. He just turned 17 on August 8,” Turco said. “He’s a flat-out scorer. He scored over 600 points last season. He can attack the rim, knock down the mid-range ‘J’ or stroke the three. His length and athleticism is what many college coaches were shocked by in person.” Turco tends to think he’ll fit in just well with the direction Temple’s taking their program. “I think he will have great success at Temple, and they have a great coach with very good assistants,” he said. “They are building a $43-million dollar practice facility that will certainly help them land more talented players like Q.” FREE THROWS Kansas has offered 2013 St. Benedict’s PG Tyler Ennis & Bill Self is expected at the school next week…West Va. coach Bob Huggins & asst Larry Harrison will be at St. Benedict`s Prep Monday for 2012 SG Melvin Johnson, who had cut list to 4…UConn, Pitt & Seton Hall assistants were at Our Savior New American today for 6-9 Chris Obekpa…6-9 Memphis forward Jarnell Stokes will take an official to UConn Sept. 30, per Jevonte Holmes (Photo courtesy Nj.com)