Abromaitis: ‘Don’t Sleep on the Irish’ 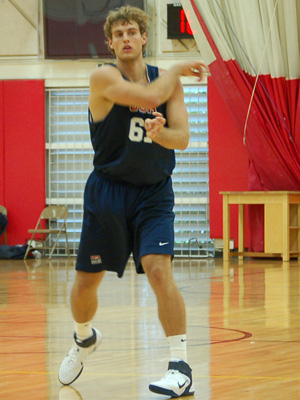 After Luke Harangody left Notre Dame following the 2009-10 season, the Irish were picked seventh in the Big East preseason coaches’ poll. They finished second. This year Notre Dame will be without Ben Hansbrough, the reigning Big East Player of the Year, as well as several other key departed players, and the coaches may once again sleep on the Irish. It wouldn’t surprise Tim Abromaitis one bit. “It seems like it happens every year with us, where we lose a senior who had a great career and everybody forgets about us a little bit,” Abromaitis said in a recent phone interview. The 6-foot-8 graduate student made the comments from Colorado Springs, Colo., where he was named a 2011 USA Basketball Men’s World University Games Team member. Team USA is currently in China, where they will play an exhibition in the city of Huizhou against New Century on Thursday. “It’s a great honor for me to be selected to this team,” said Abromaitis, who averaged 15.4 points and 6.1 rebounds last season. “It’s something that I’ve been working towards all summer. It’s an awesome opportunity for me.” He added: “Hopefully we can go over there and get a gold medal.” As for the Irish, Hansbrough (18.4 points) and former forward Tyrone Nash both signed to play in Germany, while forward Carleton Scott, who departed with one year of eligibility remaining, signed on in Spain. Guard Scott Martin (9.7 ppg) is the only returning senior on the team. (Abromaitis is a grad student.) “We’ll have to find different guys,” Abromaitis said. “We have a lot of bodies on our team, and guys that can step up. I think me included will have to step up this upcoming year.” Abromaitis said he expects sophomore guard Eric Atkins and junior forward Jack Cooley in particular to find a new level. “Eric took a back seat to Ben last year,” he said. “That was kind of his role on the team, as the point guard coming off the bench. But I think he definitely matured a lot, got stronger, worked on his shot, worked on his game. He’s a really good all-around point guard, and he’s going to be a fun one to watch next year.” Head coach Mike Brey is also counting on sophomore guards Alex Dragicevich and Jerian Grant, the son of former NBA standout Harvey Grant, to make a big contribution as well. The Irish were dealt some tragic news when recruit Eric Katenda was permanently blinded in his left eye during a pickup game. The 6-9 power forward was hurt during a game in Washington, D.C., and Brey was notified of the injury July 8. “It was just the perfect storm, he’s coming down with a rebound and the guy kind of came up and was going for the ball and got him on an angle where it really caused an injury,” Brey told the Chicago Tribune. Katenda, who attended high school in Kansas, was ranked by Rivals.com as the No. 23 power forward of the 2011 class. He was taking summer courses at Maryland’s Montgomery College in an effort to obtain academic clearance from the NCAA. Brey said the plan now is for Katenda to be fitted for goggles to see whether it is possible for him to play. He added that Katenda’s scholarship will be honored whether he suits up for the Irish or not. Notre Dame will try to move on after the tragic injury, with Big East coaches once again likely sleeping on the Irish. “I think it’s something that motivates us,” Abromaitis said, “and maybe helps us coming into the season without many external expectations. “But we all know that we can compete…and we’ll be ready to go.” (Photo courtesy USA Basketball)