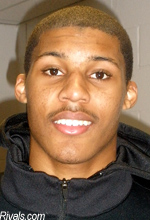 Jarnell Stokes is no longer considering Kentucky. “I’m wide open but they’re out [of] my top five,” he said Tuesday by text. According to comments the 6-foot-8 Memphis forward initially gave to Jim Tirey of NationofBlue.com, Stokes said he was hoping to hear more from Kentucky after the Peach Jam but they never called. That leaves Stokes, the No. 4 power forward in the Class of 2012, with a list of Florida, Memphis, Arkansas, Tennessee and UConn. The Memphis native will attend Oak Hill Academy next year. RECRUITING ROUNDUP **According to Five Star Basketball, St. Augustine (La.) PG Jevan Felix says now that Dominic Artis has committed to UCLA, Texas is at the top of his list. **St. Anthony point guard Kyle Anderson is still considering, UCLA, according to his dad, along with Seton Hall, St. John’s, Florida and Georgetown. **Westwind (Az.) Prep point guard Kareem Canty told Alex Kline of The Recruit Scoop Seton Hall is currently leading for him & the Pirates have “been my favorite for a while.” **2012 Team Takeover (DC) PG James Robinson has a top 5 of Pittsburgh, Miami (FL), Notre Dame, Virginia & UCLA, per @scoutsfocus. **Jake Layman, a 2012 SF from BABC listed a top 6 of Florida, Louisville, Notre Dame, Maryland, Wake Forest & Iowa, per @scoutsfocus. **2013 star Julius Randle said in his blog he will “probably visit Duke for Midnight Madness.”