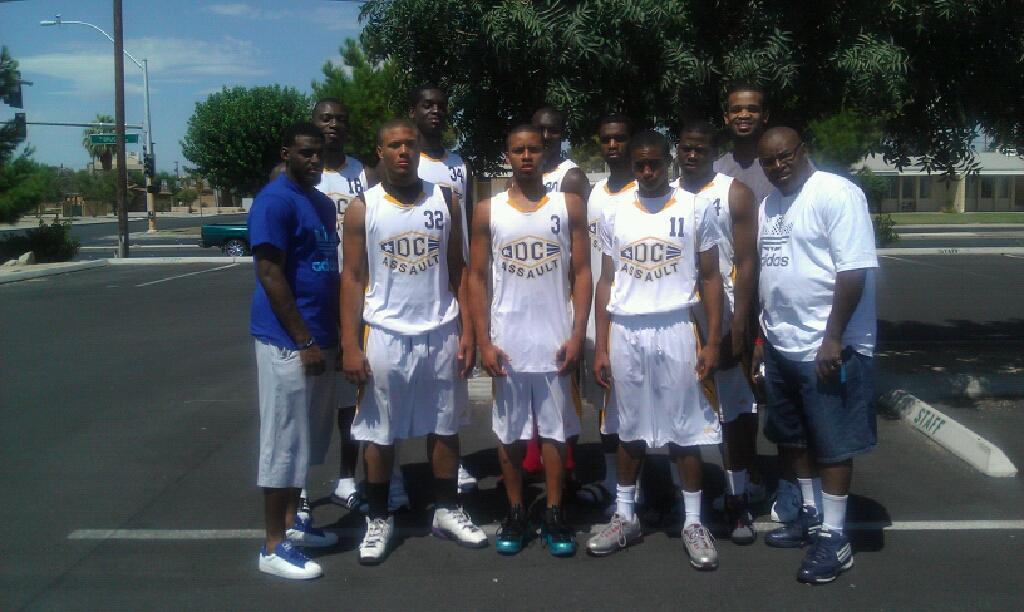 Greg Taylor insists there was no master plan behind putting several African-born players together on the DC Assault White team at the Super 64 event in Las Vegas. “It just came out that way,” he said by phone from Vegas. So far, so good. Led by several Africans, DC Assault White — the third team in Curtis Malone’s program behind Gold and Blue — is undefeated and into the championship bracket after beating Derrick Rose’s Team Rose, 70-52, Sunday night. Emmanuel Ndumanya, Daddy Ugbede and Gabriel Williams, all members of the Class of 2013, excelled in the win. Ndumanya goes 6-11, Williams 6-9 and Ugbede 6-7. Joe Boncore, a Washington, D.C.-based trainer who works with many African players, said numerous colleges are interested in all three players. “My phone’s been blowing up,” Boncore said. Boncore said Maryland, Providence, UNLV and Santa Barbara have expressed interest in Ndumanya, who may land at D.C. powerhouse Gonzaga this year. “Not bad,” said one Big East assistant coach of Ndumanya. “Runs well, good hands. Rebounds, defends very well. Limited post moves. And he’s huge.” As for the 6-9 Williams, who will play this year at Huntington (W.V.) Prep, Boncore said Virginia Tech, West Virginia and Syracuse have expressed interest. “He has a chance,” Huntington Prep coach Rob Fulford said. “He runs and jumps right now. His skill-set is still coming.” Ugbede is a wing who scored 20 points in the win over Team Rose. He has heard from Providence and several West Coast teams, Boncore said. DC Assault White also features 2012 guards Olajuwon Lewis and point guard Armani Taylor, the coach’s son. An Ivy League prospect and skilled passer, Taylor is hearing from Penn, Princeton and Nebraska, among others. “They’re getting it done,” said Greg Taylor, who also credits assistants Brandon McDonald and Timothy Morton.