Why Nerlens Noel is the MVP of Peach Jam (UPDATED) 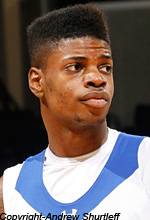 NORTH AUGUSTA, S.C. — The Peach Jam doesn’t hand out an official MVP award, but if they did Nerlens Noel should get it. In an 84-67 BABC victory over Memphis YOMCA in the finals of the Peach Jam Friday night on ESPNU, the 6-foot-9, 215-pound rising junior had 17 points, 10 rebounds and six blocks. Jaylen Brantley led the way with 24 points to lead the Boston-area club to its first Peach Jam title. Noel’s performance came on the heels of a semifinal performance in which he notched a triple-double of 12 points, 10 rebounds and 11 blocks. Noel, who attends the Tilton (N.H.) School, is part of a trio of uber-talented members of the Class of 2013 here, along with Julius Randle and Jabari Parker. But if you ask coaches which player they would take first in a draft, many go with Noel. “I’ll take Noel,” one high-major assistant said. “He can dominate without having the ball. You can put players around him who can score, while the other two have to have the ball.” Veteran New York recruiting expert Tom Konchalski also votes for Noel, who’s ranked as the No. 1 center in the Class of 2013 by Rivals. “[BABC coach] Leo Papile calls him Bill Russell,” he said. “He’s a guy who’s a terrific shot-blocker. He’s had double-figure games with blocks. He’s so quick off the floor. He runs the court extremely well. As Jay Bilas would say, he has great length. “His offense is improving. His shot-blocking is way ahead of his offensive game, but he is improving.” Noel is hearing from a Who’s Who of schools but mentioned Kentucky, Florida, Syracuse, UConn and Providence among schools who have reached out. “It’s just a dream come true to be getting all this attention from colleges,” he said. “I’m just waiting it out to make that final decision.” He said he’s not close to deciding. “I don’t think I’ll be deciding anytime soon,” he said, “because I haven’t really gotten to know many of the staff members. I’m in that process right now of getting to know the coaches and planning visits to certain schools that I’m interested in. “At the end I’ll pick the right school.” Because he will be a fifth-year senior, Noel “wouldn’t be eligible for the McDonald’s All-American Game [in 2013],” Konchalski said. “But he’s a guy who really can change the game.” ZAGSBLOG ALL-PEACH JAM TEAM Nerlens Noel, 2013 Jabari Parker, 2013 Julius Randle, 2013 Kyle Anderson, 2012 Archie Goodwin, 2012 Brandon Ashley, 2012