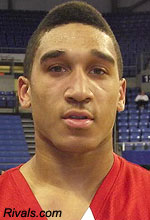 By ALEX KLINE Ishmail Wainright, a 6-foot-5 small forward in the Class of 2013 from Missouri and consensus top-50 player, has officially re-opened his recruitment. Late Thursday night, he made a life changing call to new Mizzou coach Frank Haith and staff to inform them of his decision. “I talked to my dad, mom, coach and uncle about the situation,” he said. “It’s too early to make a decision. I want to wait and go visit more schools. There could be a better situation out there.” Wainright committed on May 8 after taking an unofficial visit to Missouri and building a relationship with the new Missouri staff. Haith, the former Miami (FL) coach, and his staff made a big impression on Wainright, who chose the Tigers based off of “the great relationship with (the new staff).” Wainright will still consider Missouri and says they are “at the top of my list.” Along with the Tigers, Wainright will go back to the list of schools who were recruiting him earlier. That list includes “West Virginia, Virginia Tech, Texas, Oklahoma State, Oklahoma, St. John’s, UCLA, Arkansas, Baylor, UMKC, Memphis, Kentucky and a few more.” ASHLEY TO FINDLAY PREP Brandon Ashley, a 2012 6-foot-8 combo forward from Bishop O’Dowd in North California, has decided to transfer to a national power. Ashley will spend his senior season at Findlay Prep in Nevada, according to Pilots assistant coach Todd Simon. “He’s a great person,” Findlay coach Michael Peck told MaxPreps.com. “He comes from a great family, his mother has done a fantastic job raising him. What makes him so special as a player is how skilled and talented his is. He can handle the ball, is good with either hand, he plays hard. At the end of the day, he’s just a winner.” Ashley has averaged around 15 points and 10 rebounds for his three-year career at Bishop O’Dowd. He is currently being recruited by a majority of the Pac-12, as well as Kentucky, UConn, Texas, Ohio State, Wake Forest and others. He will join a team full of top players including guards Xavier Rathan-Mayes and Nigel Williams-Goss, along with forwards Anthony Bennett, Winston Sheppard and Landen Lucas. RECRUITING RUNDOWN **Demarquise Johnson, a 6-5 wing from Westwind Prep, enjoyed his recent unofficial to Washington. He said he liked “the coaches, the place is great. Their offense was meant for a guard and they have NBA players so they get players in the league.” He will visit UNLV this weekend. “That will probably be the last till July,” he said. **Kale Abrahamson, a 2012 wing from Iowa, picked up two high-major offers Thursday from Boston College and Seton Hall. **Jordan Forehand, a 2014 guard from St. Anthony in New Jersey, is out in California for a camp. While there, the current New Jersey Playaz guard for their U15 team, and former Playaz guard, Jio Fontan, met up on the USC campus. The current Trojan guard showed Forehand around and introduced him to the campus. **Memphis officially offered two 2013 players on Wednesday night as Isaiah Lewis and Brannen Greene received offers. The New York guard, Lewis, and Georgia forward, Greene, were both excited about it and are good friends. They may talk about the idea of potential package deal to a destination as time draws closer. **Former Louisville star Purvis Ellison is the new head coach at Burlington (N.J.) Life Center.