NEW YORK — Tristan Thompson was asked Wednesday if there was a certain NBA player he was looking forward to dunking on once he joins the league. “Hmm,” the 6-foot-9 Thompson pondered, “I probably want to dunk on Kyrie.” Thompson still owes one to Irving from their days as New Jersey prep stars. In February 2009, Irving and his St. Patrick squad demolished Thompson and then-unbeaten St. Benedict’s Prep, 88-62, in front of about 4,000 fans at the Rutgers Athletic Center. “It was actually his coming out party, you could almost call it because no one saw him play against a big-name school [before that],” Thompson, who was held to 13 points in the loss, said of Irving. “He definitely put on a show and definitely showed the world who Mr. Irving was.” Irving was still something of an unknown quantity when he took the floor that night. 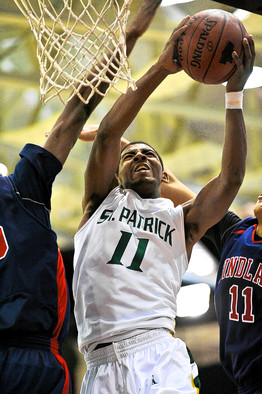 The 6-foot-3 guard had transferred from Montclair Kimberley Academy, sat out the state-mandated 30 days and was just getting accustomed to playing on a stacked team for then-head coach Kevin Boyle. “He took me when I transferred out of Montclair Kimberley and many coaches wouldn’t do that, just how successful his team was for those past seasons,” Irving, the likely No. 1 pick in Thursday’s NBA Draft, recalled on Wednesday. “So when I came in, he didn’t know what he was getting, honestly. He’d never seen me play. He was just going by word of mouth. And when I went there, it just happened that he had the confidence in me.” Playing alongside Dexter Strickland (North Carolina) and Michael Gilchrist (Kentucky), Irving proceeded to go out and drop 21 points in the victory. It was then that Boyle gave me his now famous quote — since picked up by many media outlets, including the Wall Street Journal — that Irving had the potential to be the best guard to come out of New Jersey. Ever. “Kyrie Irving, when it’s all said and done, he will arguably be as good as any guard who’s played in New Jersey,” Boyle said then. “Any guard. Ever. Ever. DaJuan Wagner, Bobby Hurley, Shaheen Holloway. You’re talking about a guy who’s a great shooter, a great finisher. He’s going to be as good as anybody who’s played in New Jersey.” Then-St. Ben’s coach Danny Hurley had this to say after that game. “The guy’s going to be a great player,” Hurley said. “It’s not because he dominates the ball or is playing above the rim. It’s because the kid plays both ends of the court. He’s got great instincts. He doesn’t take bad shots. He carries himself well with his teammates on the court.” Thompson said and he Irving had a chance to chuckle about the game during the Chicago Predraft Camp. “We were both laughing about it saying, a couple of years ago we were high school kids dreaming of going to college, and now we’re dreaming of playing in the NBA,” Thompson said. “It goes by pretty fast.” While Irving figures to be the No. 1 pick, Thompson is expected to go somewhere in the early or middle part of the first round. A native of Brampton, Ontario, Thompson has been called by his AAU coach Ro Russell the best forward ever to come out of Canada. Steve Nash is considered the best Canadian guard ever, and Thompson said he’s spoken to Nash but never played against him. After Thompson gets drafted, he expects a parade of fellow Canucks to follow him, including incoming Texas point guard Myck Kabongo, his former teammate at St. Benedict’s and Findlay Prep. “I think it’s just the beginning,” Thompson said. “I think me and Cory [Joseph] are just the pioneers of what’s more to come. We have Myck, Kevin Thomas, Anthony Bennett, Andrew Wiggins, there’s a lot of young talented guys.” By the time any of them arrive in the NBA, Thompson plans to flush one on Irving. To make up for the blowout Kyrie gave him two and a half years ago. RELATED CONTENT **New York making comeback in NBA Draft **Kanter says he’s best player in the draft