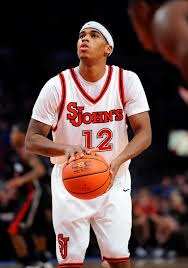 EAST RUTHERFORD, N.J. — Dwight Hardy and Ben Hansbrough competed for Big East Player of the Year honors last season. Yet on Monday they were teammates at a Nets workout. “We had the opportunity to be on the same team today and it was kind of fun because we’re the only two guys from the Big East here,” said Hardy, a 6-foot-2 guard from St. John’s who lost the player of the year award to Notre Dame’s Hansbrough. “We kind of used that to our advantage. We played in the best conference in America.” While Hansbrough had already worked out for a number of NBA clubs, Hardy participated in his first workout. “My agent called me and told me I had a workout with New Jersey,” said Hardy, who averaged 18.3 points last season and was a first-team All-Big East selection. “It’s a local team, they’re coming to Brooklyn and I just felt so happy. If I was to get picked by this team, I would be back still in New York like playing at St. John’s.” The Johnnies made the NCAA Tournament for the first time since 2002, but lost in the first round. Hardy said he may never get over the loss to Gonzaga. “I’m still not over it,” he said. “It still dwells upon me and I don’t think it’s ever going to leave my head but I don’t think it’s going to stop me from moving on.” Hardy plans to watch Thursday’s NBA Draft with his family in The Bronx. He is not projected to be selected and said he’s ready to play overseas if he doesn’t land on an NBA roster. He’s already worked out for a team in France, although he couldn’t remember the name. “I was out in France working out,” he said. “They got a real good team out there. I wouldn’t mind going overseas if my name wasn’t called or if I don’t get called from an organization. I still want to play basketball.” Hardy has a 4-year-old daughter, Aniyh, and a mother, Stephanie, he’d like to move out of the projects. If he’s able to play professionally, his first priority will be to take care of them. “I live in the projects,” he said. “The first thing I want to do is get my moms out of the projects, you know. I’m sure y’all know where I grew up is very rough and dangerous, so that will be my first option to get my family away from there. “That’s all I think about when I’m working out or doing anything with basketball, just provide a better life for my family.” 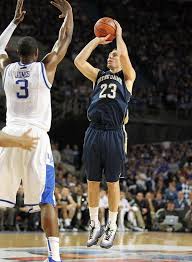 The 6-3 Hansbrough knows a little about NBA life since his older brother, Tyler, was the 13th pick in the 2009 Draft. “I think Tyler’s been a great influence on me,” said Ben, who averaged 18.4 points and 3.9 rebounds last season for the Irish. “He continues to tell me, ‘Bring your intensity.’ I think his work ethic and his tenacity has always been like a role model to me. “He’s always been an overachiever and I’ve been trying to follow in his foosteps.” Hansbrough addressed the media with his ankles in an ice bath because he’s still battling a sprained ankle. “This is the best it’s felt in a long time,” he said. “I was able to move around more like I wanted to. I think it’ healing up and I think this was probably the best workout I’ve had so far as far as mobility-wise and quickness-wise and get a little bit of my step back.” Still, Nets general manager Billy King said he was impressed with Hansbrough, a gutsy player who scored 20 or more points 15 times last season. “He’s very good at the pick and roll,” King said. “Mike Brey and Notre Dame do a lot and he’s very good at running the pick and roll and shooting the ball, too.” Hansbrough will work out with the Atlanta Hawks and possibly the newly-minted NBA champion Dallas Mavericks and has already worked out for five teams. If he’s not drafted or if there’s a lockout, he said he’ll make a decision at that point. “That’s one of those things where you have to address it when it gets here,” he said. RELATED CONTENT **Farrakhan’s grandson works out for Nets

Farrakhan's Grandson Works Out for Nets