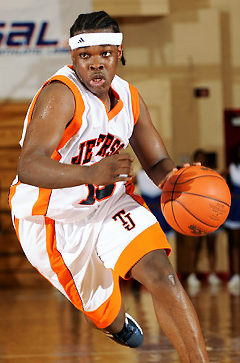 By ALEX KLINE When Davontay Grace was a seventh-grader, he was one of the top members in the class of 2010, according to the Hoop Scoop. Grace later reclassified to 2011 and attended Thomas Jefferson High School in Brooklyn. During his junior season he committed to St. John’s and later witnessed the firing of his future head coach, Norm Roberts. This led to Grace re-opening his recruitment and eventually finding the right fit at Manhattan under Barry Rohrssen. Rohrssen and his staff were later fired after the season, leaving Grace vulnerable yet again. Now the 6-foot-1 point guard out of Brooklyn decided that he will move on once again. “I’ve decided to attend prep school and take a postgrad year,” he said by phone Thursday afternoon. “I’m heading to CJEOTO in New Jersey.” Grace, who is one of the bulkier guards in his grade, didn’t believe he was ready for the college game. “I decided to do an extra year in order to prepare myself for school and basketball in college,” he said. Grace claims to have already lost “15 pounds” and states that his current weight is around 210 pounds. “Davontay Grace is a very skilled basketball player who shoots it very well,” said CJEOTO coach Ian Turnbull. “We will work very hard on his conditioning to get him ready for the next level. His best basketball is ahead of him.” At the moment, Grace does not have a list of any schools who are recruiting him and is waiting for the July live period to start. There is one problem with that, however. He has yet to find an AAU team. His former team, Juice All-Stars, who are coached by Lincoln head coach Tiny Morton, currently has a starting point guard in 2012 St. John’s commit Jevon Thomas, who came over from the New York Gauchos. “I need to find an AAU team before anything,” Grace said. “The rest will work itself out.” RECRUITING RUNDOWN TJ Warren, a 2012 forward from Word of God in North Carolina, now has 10 offers after receiving a phone call and scholarship from Billy Donovan of Florida. The Gators are joined by Georgetown, N.C. State, Kansas, Ohio State, Miami (FL), Tennessee, Arizona State and Wake Forest. Ohio State offered 2012 forward Alex Poythress of Northeast in Tennessee today. Since the spring, his recruitment has taken off. Poythress now has offers from the Buckeyes, as well as UConn, Florida, Georgia, Marquette, Memphis, Miami (FL), Missouri, Tennessee, Vanderbilt and Western Kentucky. Duke could be next to offer as Coach K has talked with the talented junior a fair amount recently. Starting this weekend, Kareem Canty will make his way onto the Xavier campus in Ohio for an unofficial visit. The 2012 point guard out of Bridgton Academy in Maine recently visited Seton Hall a few weeks back. And like ZAGS on Facebook

Walsh Out as Knicks President

Is Isiah Thomas the Man Behind the Curtain?