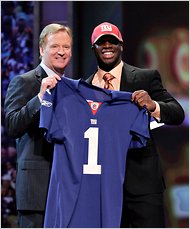 In the span of about 12 hours Thursday, New York sports added God, a Prince and Muhammad. The only thing missing was Abraham, Isaac and Jacob. “We need as much divine intervention as we can get,” cracked New York high school recruiting expert Tom Konchalski. God’s Gift Achiuwa, a 6-foot-8 power forward from Nigeria, signed a Letter of Intent with St. John’s. The Giants drafted cornerback Prince Amukamara out of Nebraska during the NFL Draft. And the Jets selected defensive tackle Muhammad Wilkerson from Temple. Achiuwa and Amukamara are both Nigerian. God’s Gift has one older brother, Promise, and two younger brothers, God’s Will and Precious. He also has one older sister, Grace, and one younger sister, Peace. If it’s not the greatest college basketball name ever — God Shammgod, Majestic and Scientific Mapp come to mind — God’s Gift is certainly right up there. Next year at St. John’s, Achiuwa will team up with Sir’Dominic Pointer, a freshman from Detroit who has a twin sister named Miz’Unique. “The St. John’s women’s team should recruit Miz’Unique,” Konchalski said. Both Achiuwa and Pointer should jump to the top of the College Basketball All-Name Team for the 2011-12 season. This year’s team, as comprised by Ballin’ is a Habit, included: Amukamara’s grandfather was the king of Awo-Omamma in the Imo State of Nigeria, according to The New York Times. Prince’s father, Romanus, was once a chief, and Amukamara could have been next in line, but “a lot of stuff would have to come into play,” he told the Times. “I would basically have to live there to be chief, basically.” Muhammad was a 240-pound freshman who left Temple after his junior season. “He’s a young man who was an excellent player in college, but we think he has more to give,” Jets coach Rex Ryan told The Times. And hopefully God, the Prince and Muhammad can give back to New York sports. “Look how abysmally poor New York sports teams have been,” Konchalski said. “All I can say is that this is the only hope for New York sports. Overall, I think we need it.” And like ZAGS on Facebook.

Source: Calipari Would be 'Crazy' to Coach the DR