Dominique Rutledge’s long journey to Division 1 basketball appears to be coming to fruition.

The 6-foot-8, 230-pound Newark, N.J. native verbally committed to West Virginia Friday, choosing the Mountaineers over UConn and Utah State, among others. He will have two years of eligibility at the Big East school.

“I’ve always been a huge fan of West Virginia and the way Coach [Bob] Huggins runs his program,” Rutledge said by text.

“He likes the head coach,” added Western Texas College coach Jason Sautter. “He likes their style. He likes what they do.”

Rutledge initially committed to St. Joe’s back in 2007 out of Edison (N.J.) Jobs Corps Academy, choosing the Hawks over Seton Hall, St. John’s, Providence and Auburn. 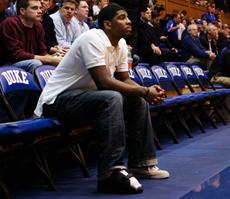 Duke freshman point guard Kyrie Irving is now out of his walking boot for good, but it remains unclear if he’ll play again this season.

Duke coach Mike Krzyzewski said the West Orange, N.J. native has been cleared for “a few basketball-related activities” as he recovers from the toe injury suffered Dec. 4 against Butler at the Izod Center.

Gonzo is out and Boylan is in.

“We talked to him [Gonzo] but it didn’t work out,” said Ken Taylor, associate commissioner for the MAAC. “He had a conflict.”

The No. 4 shooting guard in the nation is attempting to get qualified while still considering the same two options.

It came down to North Carolina and

Expectations on the Rise for Knicks

GREENBURGH, N.Y. — Chauncey Billups is doubtful for Friday’s game against Cleveland with a thigh bruise, but expectations are on the rise for the Knicks as they head into the final 23 games of their season.

New York is 3-2 since acquiring Billups and Carmelo Anthony at the trade deadline. They own a win over LeBron James and Miami and beat Chris Paul and New Orleans, 107-88, on Tuesday with Toney Douglas scoring 24 points as Billups’ replacement.

“I think if you asked Amar’e, if you asked Carmelo, had asked Chauncey, they think they are as good as anybody in the league,” Knicks coach Mike D’Antoni said Thursday after practice. “So that’s what their expectations are, not to make the playoffs but to be really good in the playoffs.