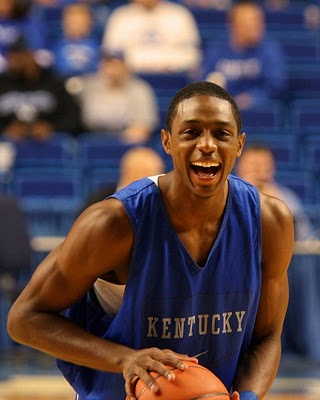 NEWARK — In the fall of 2009, UConn coach Jim Calhoun and his staff were on the hunt for an elite guard to pair with Kemba Walker in the backcourt. Jerome Dyson would be leaving in the spring of 2010 and the Huskies pursued several of the top point guards in the Class of 2010. Among the guards who visited the Storrs campus that fall were Brandon Knight and Doron Lamb. “UConn was probably one of my favorite schools growing up as a kid, watching all the greats that went to UConn,” Knight said Sunday after scoring a game-high 22 points as Kentucky beat North Carolina, 76-69, in the East Regional final at The Prudential Center. Both guards waited until the spring signing period before spurning UConn — and several other schools — to play for John Calipari at Kentucky. On April 14, 2010, Knight announced for Kentucky on ESPNU. Four days later at the Jordan Brand Classic at Madison Square Garden, Lamb followed suit and also chose the Wildcats. “I went on a visit there,” Lamb, a Queens native, said of UConn. “That was one of my official visits. They recruited me real hard, but I decided to come to Kentucky.” Lamb said he preferred Calipari’s style of play and was attracted to his legacy of producing NBA guards. “He lets you play your game,” Lamb said. “If the man can’t guard you, you drive past him. And if he stops you, you kick it out to the next person and he drives so that’s a great offense to play.” Now, Knight and Lamb will face UConn in a national semifinal Saturday in Houston, with Butler to face VCU in the other semifinal. “No question, we were disappointed,” Calhoun said Monday of losing out on the Kentucky duo. “It’s kind of ironic we’re playing against two of the kids we really worked very hard after.” That year, UConn also missed out on Cory Joseph (Texas) and Josh Selby, who announced for Kansas the same day Lamb picked Kentucky. “The one thing I will guarantee you after 39 years of doing this, you get a lot more “No’s” than you do get “Yesses,” Calhoun said. “But you’ve got to make sure you’re going after enough good kids who have great potential that give you those yesses to make a difference.” While UConn did strike out on the supposed “big names” in the Class of 2010, they did secure pledges from guards Shabazz Napier, who finished up at Lawrence (Mass.) Academy and Jeremy Lamb, a wing from Norcross, Ga. While they were relatively unheralded at the time, both have gone on to play critical roles as UConn has won nine straight postseason games to capture the Big East tournament and reach the program’s fourth Final Four since 1999. The 6-5 Lamb is averaging 11.1 points and 4.3 rebounds on the season, but has delivered huge performances in the postseason as Walker’s running buddy. He scored 24 points in the West Regional semifinal win over No. 2 San Diego State and then added 19 in the 65-63 victory over Arizona Saturday. The 5-11 Napier is averaging 8.0 points and 3.0 assists, including a 10-point, 2-assist performance against Arizona, helping to take some of the ball-handling responsibilities off of Walker. “When we got Shabazz and Jeremy Lamb, we think we got two pretty good players,” Calhoun said. “Next year when Kemba’s gone, Shabazz is going to mold into one of the best point guards in the country. And Jeremy Lamb has already molded into one of the best freshmen in the country.” Despite how talented Knight is, Calhoun said he doesn’t allow himself to “fantasize” about how things might have been different had he landed at UConn. “I’m much more interested in the kids we get,” he said. “And so I really think about who we have and what they’re going to do. Kemba and Shabazz, how do they work together? And they’ve worked together pretty good. We’ve won 30 games.” RELATED CONTENT **Kentucky President: ‘This banner won’t come down‘ **Sullinger says he’ll stay at Ohio State **New York City, Oak Hill repping well in NCAAs **Sullinger will have late uncle on mind in Newark **Source: Williams would consider Texas **Latest Calipari point guard, Brandon Knight comes up big **Top freshmen weighing one and done