PISCATAWAY, N.J. – As Michael Gilchrist drove toward the basket and put up a jump shot early in the fourth quarter of the unofficial high school national championship game between St. Patrick and St. Anthony, Kyle Anderson lurked patiently a few feet away in the paint. The 6-foot-8 Anderson jumped and swatted the shot away, collected the loose ball and then passed it ahead to teammate Myles Mack. Playing in his future college home in the Rutgers Athletic Center, Mack fed it to teammate Jordan Quick for a run-out layup and a five-point lead. Anderson’s played fueled an 8-0 game-changing run and St. Anthony, No. 2 in the nation, shocked and stunned No. 1 and previously unbeaten St. Patrick, 62-45, in the North Non-Public B final before a capacity crowd of 8,057 that included Kentucky coach John Calipari, Rutgers coach Mike Rice and a crew from “60 Minutes.” “The block was great, but I think the pitch-ahead to Myles starting the break on the other end was maybe the complete play,” said Anderson, a junior. St. Anthony could have won by an even wider margin had it not gone 7 of 21 from the foul line. After outscoring the Celtics 23-5 in the fourth quarter, the Friars improved to 30-0 under Naismith Hall of Fame coach Bob Hurley, who earlier this season earned his 1,000th career victory. 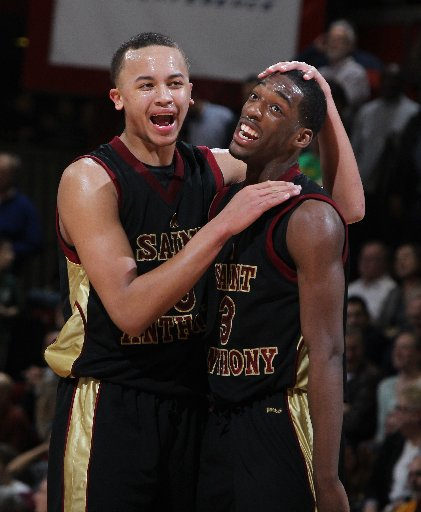 “I can’t describe what just happened,” Hurley told a room full of reporters. “We beat a great high school team…The best team tonight won the game. And we’re glad it was us.” Heavily favored St. Patrick (26-1) suffered its first loss of the season after successfully running a gauntlet of nationally ranked opponents. “We’re No. 1 now,” Anderson said with a laugh. “That’s pretty clear.” St. Patrick coach Kevin Boyle, who compared the game to a “heavyweight fight,” could not disagree. “They beat us and then they ended up stretching in the last quarter, so I think they have to clearly get the stamp as No. 1 in the country, providing they finish,” Boyle said. Oh, yes, finish. St. Anthony still must play Gloucester Catholic in Saturday’s Non-Public B final at 6 p.m. in Toms River. Gloucester Catholic beat Cardinal McCarrick, 40-38, on Wednesday. The winner of Saturday’s game will advance to the Tournament of Champions, which features the winners of New Jersey’s six groups – four public and two non-public. “We still got a couple more games to go,” said Anderson, who finished with 11 points, 8 rebounds, 5 assists, 2 blocks and 2 steals while guarding Gilchrist for part of the game. After beating a Paterson Catholic team that featured Anderson and Mack in last year’s North Non-Public B final here, St. Anthony lost to Trenton Catholic in triple overtime in last year’s B final. Trenton Catholic went on to win its first Tournament of Champions title. St. Patrick, which featured current Duke freshman Kyrie Irving, had been suspended from the state tournament for holding out-of-season workouts. After saying on Sunday that nobody could stop St. Patrick this season, Gilchrist was effectively muted by the Friars. They held the Kentucky-bound McDonald’s All-American to 7 points on 2 of 11 shooting to go with 14 rebounds and 5 blocks before he fouled out in the fourth quarter. St. Anthony rotated long (Anderson), strong (Lucky Jones) and short (Quick) defenders on the 6-7 Gilchrist and also threw in some zone. “We wanted to stop him in transition because he’s very good at getting the offensive rebound and pushing it and looking to score,” said St. Anthony associate head coach Ben Gamble. “So we did a really good job of doing so.” Said Boyle: “He’s one of the great players in New Jersey history. Obviously, it wasn’t the game he wanted to go out with. I think when you’re defining somebody’s career, big games are a big part of that. But he’s been in a lot of big games and he’s been great in most of them.” Mack, the Rutgers-bound point guard, scored 10 of his 19 points in the second half as St. Anthony pushed the tempo in transition. He added 5 steals, 4 rebounds and 4 assists. St. Anthony’s big men, Jones (12 points, 9 rebounds) and Jerome Frink (8 points, 5 rebounds), were relentless on the boards down the stretch. “This guy ripped balls out of people’s hands,” Hurley said of Frink. St. Patrick led by as many as nine in the first half and was still ahead 40-39 after three quarters thanks to 23 of Western Kentucky-bound Derrick Gordon’s game-high 26 points. But Anderson’s block on Gilchrist fueled an 8-0 run that pushed the Friars ahead 47-40. Later, Anderson grabbed an offensive rebound off his own missed foul shot and hit a pullup jumper over Gordon to extend the St. Anthony lead to 52-42. “We almost looked like we got emotionally drained,” Boyle said. “They took the wind out of our sail a little bit with some plays and got a little distance.” Anderson and Mack both landed at St. Anthony after their old school, Paterson Catholic, closed its doors last June due to financial troubles. And many of their old schoolmates, teachers and friends were in the capacity crowd for their triumphant moment. “Being on the other end for the last two years losing to St. Pat’s, losing to St. Anthony with Paterson Catholic, I just felt like me and Myles just did it for our Paterson Catholic family who didn’t get to do it in the past,” Anderson said. “So it was real emotional for me.” FREE THROWS The game will be shown on tape delay on New Jersey FIOS systems on Saturday at 7:30…Rice and his staff attended the game after falling to St. John’s 65-63 in a controversial Big East tournament game that ended with the Big East acknowledging two errors in the closing seconds. (Photo courtesy Star-Ledger)

Other features by Adam Zagoria