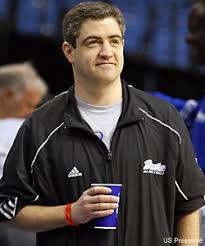 Keno Davis could be out as the head coach at Providence “as soon as this weekend,” according to a report by the Providence Journal citing a “person close to the basketball program.” Davis is 46-50 in three years at the Big East school, 19-39 within the conference. Davis has five years remaining on his contract but school boosters are said to be working to buy him out. Providence fell to Marquette, 87-66, Tuesday in the first round of the Big East tournament. Providence athletic director Bob Driscoll told the Journal he was in New York for school obligations, “but I’ll be back in town over the weekend and we’ll have the opportunity to talk to Keno then.”