For Lavin & His Staff, It Must Be The Shoes…Or Sneakers 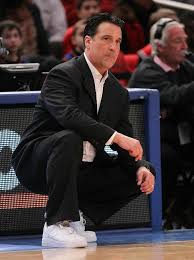 NEW YORK — Steve Lavin will be prowling the sidelines in the NCAA tournament this year, but don’t expect to see the St. John’s coach in dress shoes and a tie.

After going 6-1 while wearing white Nike Air Force One “Uptowns,” Lavin and his staff plan to continue the non-traditional look for the foreseeable future.

“The rest of my career I don’t anticipate ever going back to a tie or to dress shoes ever again,” Lavin said after his team stunned No. 4 Pittsburgh, 60-59, Saturday at Madison Square Garden on a last-second underhand layup by senior guard Dwight Hardy.

NEW YORK – With under four minutes remaining and his team trailing the No. 4 team in the country by 2 points in a tense, tournament-style atmosphere at Madison Square Garden, St. John’s Steve Lavin gathered his players during a timeout.

“This is Madison Square Garden,” Lavin told the Johnnies before his team pulled out a dramatic 60-59 victory over Pittsburgh on a last-second underhanded, flip-in layup by Dwight Hardy. “You’ve got this place electrified. You’re playing with your best friends, and you’re playing at Madison Square Garden. This is fun. It’s about enjoying this moment and playing with passion.”

Lavin, whose team will be ranked Monday for the first time since Nov. 28, 2000, says he’s become more “even-keeled” as he’s gotten older and is “a little more calm” compared with his first coaching tenure at UCLA, which ended with his firing.

UNION, N.J. — Even from as far away as Henderson, Nev., Amir Garrett has his eye on St. John’s.

He saw them hammer UConn on national television.

And he’s kept up with their recent road wins over Cincinnati and Marquette.

“Oh yeah, I watched them, man. I was hyped,” the 6-foot-6, 200-pound Garrett said Sunday before scoring 15 points and grabbing 7 rebounds in Findlay Prep’s 76-50 victory over Newark East Side in the PrimeTime Shootout at Kean University.

Battle of the Boroughs: Prokhorov vs. Dolan for ‘Melo

Battle of the Boroughs: Dolan vs. Prokhorov

Source on ‘Melo to Nets: ‘If he doesn’t sign, he ain’t coming’ (UPDATED)

Carmelo Anthony still must sign a three-year, $65 million extension in order for the reported trade between the Denver Nuggets and the Nets to go down.

“If he doesn’t sign, he ain’t coming,” a league source said Friday.

The source added: “The whole [Nets] crew is out there [at All-Star weekend in Los Angeles]. I think they want to get this done and I think Denver wants to get it done.”

The Bergen Record reported Friday on its Website that the two teams had agreed upon a deal that was contingent upon Anthony signing the extension.

Gary Trousdale had one goal in mind

Findlay’s Bennett Could be Next Canadian Star

The next big Canadian star could be 6-foot-8, 230-pound Anthony Bennett, a 2012 forward from Brampton, Ontario who plays for national power Henderson (Nev.) Findlay Prep.

“Bennett is a talent,” one Division 1 head coach said. “He has broad shoulders. He could become a beast.”

Bennett has offers from UNLV, UConn, Georgetown, Pittsburgh, Arizona and others, but says he has “No favorites yet.”