Knicks forward Danilo Gallinari is expected to miss two to three weeks with a sprained left knee. Gallinari was hurt Sunday during the fourth quarter of the team’s 98-92 victory over Indiana when Pacers swingman Brandon Rush lost his balance after driving for a layup and his right shoulder collided with Gallinari’s knee. Gallinari said after the game he didn’t think the injury was much to worry about, and an MRI exam on Monday confirmed it was only a mild sprain. The “Italian Stallion” is fourth on the team with 15.3 points per game. In other Knicks news, rookie guard Landry Fields was named Eastern Conference Rookie of the Month. Fields ranked second in scoring among rookies (8.8 ppg), third in rebounding (7.9) and led all rookies in steals (1.23). The Knicks host San Antonio Tuesday. (The AP contributed) And like ZAGS on Facebook.

Lance Returns to Garden, But Only to Watch

Amar'e on His Return to Phoenix 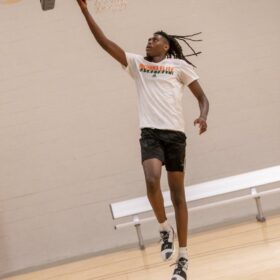