In the year’s first edition of The Big East Report, Mike DeCourcy of The Sporting News was kind enough to join us to talk about TCU’s addition to the Big East, Kemba Walker’s remarkable start to the season and candidates for Freshman of the Year. Part 1 is above and Part 2 is below. 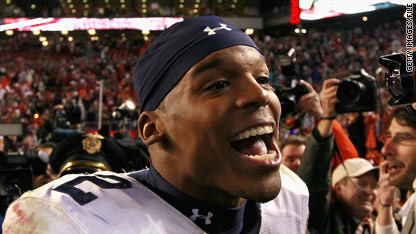 After all that, Cam Newton was suspended for just one day.

The NCAA announced Wednesday that after a one-day suspension, the Auburn football star had been reinstated and is “immediately eligible to compete.”

The NCAA said that Newton’s father, Rev. Cecil Newton, and another unnamed person “worked together to actively market the student-athlete as a part of a pay-for-play scenario in return for Newton’s commitment to attend college and play football.”

Auburn has limited the access Newton’s father has to the athletics program and Mississippi State has disassociated the involved individual.


Check out this great interview by SNY’s Timmy Welsh with UConn junior guard Kemba Walker of New York, who’s dropped 150 points in his last five games, including 30 in Tuesday’s come-from-behind win over New Hampshire at home. Is he the National Player of the Year at this point?

See the video below for highlights of the game.