Eugene McCrory, a 6-foot-8, 240-pound forward who was once committed to Seton Hall, has a number of scholarship offers and hopes to decide in the coming months.

“I’m going to decide in January or February,” he said by text.

McCrory, who has dropped more than 30 pounds since the summer, holds offers from Wagner, Texas Southern, Hofstra, St. Bonaventure and Northeastern, according to Ian Turnbull of CJEOTO, where McCrory is averaging 21.4 points, 11.6 rebounds and 1.3 blocks on a postgrad team that also includes Rutgers signee Kadeem Jack.

If you’re a Kentucky fan, be sure to check out 2011 commit Anthony Davis of Chicago Perspectives Thursday at 5 o’clock EST on ESPNU.

Also, Duke and Kentucky fans — and hoopsters in general — should circle Jan. 14 when Duke-bound Austin Rivers and Winter Park (Fla.) hosts Kentucky commit Michael Gilchrist and Elizabeth (N.J.) St. Patrick. These two were scheduled to meet in August in Orlando, but Gilchrist went on vacation with his family. 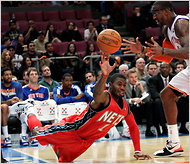 The Nets must believe they can still land Carmelo Anthony.

By dealing Terrence Williams to the Houston Rockets in a three-team trade that netted the Nets two additional first-round draft picks, New Jersey now has still more to offer the Denver Nuggets in a trade.

The Nets will receive the Rockets’ first-round draft pick in 2012 (lottery protected), the Los Angeles Lakers’ first-round pick in 2011 (protected 1-18) and the expiring $5.475 million contract of Lakers shooting guard Sasha Vujacic (who is engaged to tennis star Maria Sharapova).

The Lakers receive veteran Joe Smith in the trade, which was first reported by Yahoo.com and The Bergen Record.

“This trade benefits our team in both the short and long term,” Nets GM Billy King said. “Sasha is a veteran NBA player who will add depth to our backcourt rotation, while the addition of the two future number one picks adds to our assets as we look to rebuild into a championship contender.”

Walsh Agrees With Pierce: No Rivalry Yet

GREENBURGH, N.Y. — On the eve of the Boston Celtics’ visit to Madison Square Garden, Knicks president Donnie Walsh agrees with Paul Pierce on one point: there is no rivalry just yet.

“It’s a rivalry?” Pierce told reporters in Boston. “Man, y’all are letting me in on all the new stuff, all the talk. I didn’t know we had a rivalry going.”

Since Pierce, Ray Allen and Kevin Garnett joined the Celtics before the 2007-8 season, Boston is 11-2 against the Knicks.

Riding the red-hot tandem of Amar’e Stoudemire and Raymond Felton, the Knicks have won eight in a row and 13 of 14.

Yet Walsh agrees there is no real rivalry yet.

When Josh Selby makes his long-awaited debut for Kansas Saturday against Southern Cal, he has one simple goal.

“The only thing I would like to do is don’t mess up the chemistry of my teammates,” Selby, an explosive freshman combo guard, said Monday on a teleconference. “They already have a great chemistry out there, as you can see, when you watch the games.”

The NCAA ruled last month that Selby, a McDonald’s All-American who averaged 32 points a game at Baltimore’s Lake Clifton High, must sit out nine regular season games and repay $5,757.58 in impermissible benefits to the charity of his choice. Selby reportedly received the benefits from Robert Bay Frazier, the business manager of Carmelo Anthony. Selby has admitted to having a personal relationship with Frazier, who, like Anthony and Selby, is from Baltimore.

// Here's my recent interview with