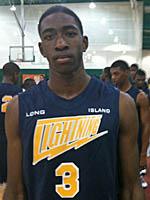 **After I wrote this post, Jason’s father emailed me to say there was no timeframe on his son’s decision.**

He has visited Syracuse, St. John’s and Seton Hall unofficially.

NEW YORK (AP) — Steve Lavin doesn’t look much different than he did when he left coaching college basketball seven years ago to become a TV analyst.

The slicked-back hair is still there, just combed in a more 2010 style.

The clothes that never touched a rack are still there, as is the glib style he uses to show off a big-time vocabulary, courtesy of his teacher parents.

The solid restart to big-time recruiting is there, too, with three highly rated signees for next season. PHILADELPHIA (AP) — The Big East conference is set to expand its football roster.

Big East presidents unanimously agreed to expand the number of football-playing schools to 10 at Tuesday’s board of directors meeting in Philadelphia.

Commissioner John Marinatto said in a statement potential expansion candidates will start to be evaluated. He declined comment to The Associated Press, along with athletic directors and Big East adviser Paul Tagliabue, after the meeting.

The 16-member Big East, where all members play basketball, has eight teams playing football. There was no timetable announced for a decision.

Norvel Pelle, the No. 2 center in the Class of 2011 out of Los Angeles Price High School, will visit St. John’s this weekend.

“Norvel is going to visit St. John’s this weekend,” his sister, Cherisa, said by text.

This will be his first official visit.

SOUTH ORANGE, N.J. — Seton Hall has applied for a waiver for senior forward Jeff Robinson in hopes of getting him another year of eligibility during the 2011-12 season.

“The waiver has been applied,” Pirates coach Kevin Willard told ZAGSBLOG Tuesday at media day. “Now it’s just a matter of waiting for the NCAA so he would be back next year.”

Robinson, a former standout at Elizabeth (N.J.) St. Patrick, played five games at Memphis in the first semester of the 2008-09 season before transferring to Seton Hall.

Typically recruits who transfer mid-year lose a season of eligibility.

The NBA game scheduled for this evening