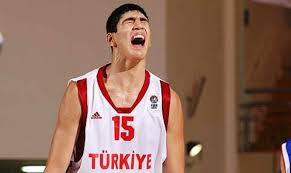 Kentucky freshman forward Enes Kanter has been ruled “permanently ineligible” by the NCAA, but he is still permitted to practice. Asked Thursday by reporters if Kanter could practice with the team, head coach John Calipari told reporters: “There is a chance, but he won’t be playing Friday.” The Wildcats open with East Tennessee. Jerry Tipton of the Herald-Leader reported Thursday that Kanter was “seen wearing practice gear.” Here’s the release from the NCAA: The NCAA student-athlete reinstatement staff has ruled University of Kentucky men’s basketball student-athlete Enes Kanter permanently ineligible for receiving benefits above his actual and necessary expenses while playing for a club basketball team in Turkey. The university will appeal the decision to the Division I Student-Athlete Reinstatement Committee at the end of the month.  The reinstatement committee is the final appeal opportunity in the initial-eligibility process.  It is independent and comprised of representatives from NCAA member colleges, universities and athletic conferences and can reduce or remove the conditions, but it cannot increase the conditions imposed by the staff. Actual and necessary expenses are defined by NCAA rules and generally relate to a player’s expenses directly necessary for practice and competition on a team.  Some examples include meals and lodging directly tied to practice or competition, coaching, medical insurance and transportation tied to practice or competition. Kanter played three seasons with the Turkish sport club Fenerbahce from 2006-07 to 2008-09. Although he competed primarily for the club’s under-18 junior team, he did compete on the club’s senior team in 2008-09. According to facts agreed to by the university and the NCAA Eligibility Center, Kanter received $33,033 more than his expenses for the 2008-09 season. The new NCAA rule that allows prospective student-athletes to compete on teams with professionals while maintaining their amateur status prior to college applies; however, the bylaw states any such benefits cannot exceed actual and necessary expenses, which was the case here. “Enes took advantage of an opportunity to play at the highest level available to him, but the consequences of receiving payments above his actual expenses is not compatible with the collegiate model of sports that our members have developed,” said Kevin Lennon, NCAA vice president of academic and membership affairs. The reinstatement staff considers a number of factors when deciding each case. These include the nature and seriousness of the violation; any impermissible benefits received; the student-athlete’s level of responsibility; any mitigating factors presented by the university; applicable NCAA guidelines; and any relevant case precedent. “We appreciate that the NCAA has an appeals process to allow this young man to defend the uniqueness of his circumstances,” said Mitch Barnhart, University of Kentucky director of athletics. “Enes is a great kid who is working hard in the classroom and enjoying being a college student.  It is our hope that he will be allowed to continue his academic and athletic career at Kentucky.” Kanter moved to the United States in 2009 and attended a prep high school before enrolling at Kentucky this fall. NCAA student-athlete reinstatement guidelines allow Kanter to resume practicing but not compete or travel with the team while the appeal is pending. Follow Adam Zagoria on Twitter