LeBryan Nash is considering four schools but says one is the team to beat.

“Oklahoma State might have a slight lead over everybody and they might be the school to beat,” the 6-foot-7, 227-pound small forward from Dallas Lincoln said Saturday night by phone.

Nash is also mulling Baylor, Kansas and Arizona and has officials set to Arizona Sept. 24 and Kansas Oct. 15.

He recently tripped to Baylor and said he’s been to Oklahoma State — about three hours from his home — approximately half a dozen times.

“Arizona might be matched up with Oklahoma State,” he said. “They might be if everything goes well on the visit.”

Dan Barto, the post-graduate coordinator/coach at the IMG Basketball Academy, said none of his players, including guard Phil Greene and wing DeAndre Daniels, will visit anywhere until 2011 and won’t sign until the spring.

“None of our kids are going to take any visits until 2011,” Barto said Saturday by phone. “We’re trying to rebuild our team from scratch. We need all our guys here taking care of their schoolwork.”

The 6-foot-2 Greene, a Chicago native, was supposed to visit West Virginia this weekend and St. John’s next.

Quinn Cook was in the car on the way back to Oak Hill Academy from Duke when I caught up with him early Saturday evening.

The 6-foot-1 senior point guard enjoyed his brief visit for No. 1 Alabama’s 62-13 drubbing of the Duke football team and could envision teaming up with Austin Rivers in a potential future Duke backcourt.

“We definitely can play together,” said Cook, the No. 7 point guard in the Class of 2011 according to Rivals. “Austin is one of my close friends. We were on the same team at [Boost Mobile] Elite 24. We play well together. We communicate very well. He’ll tell me what he sees and I tell him what I see. He’s a very great player. I like being on the court with Austin.”

Rivers, the No. 1 player in the Class of 2011, visits Duke Oct. 15 and is also considering North Carolina and Kansas.

Izzo: Cavs Offer Was ‘Toughest’ Choice of His Life 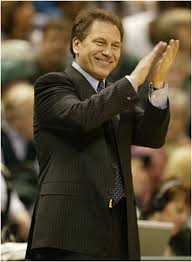 NEW YORK — Michigan State coach Tom Izzo said the offseason offer he received to coach the Cleveland Cavaliers was the “toughest” choice he ever had to make.

“I’ve got to admit, it was the toughest decision I’ve had in my coaching career just because of the opportunity,” Izzo said Friday.

“Not only to be a head coach in the NBA, and a lot of money to be honest with you, but also the thought of being able to maybe coach a LeBron James, one of the greatest players who ever played. So it was tough. I gave it a good look. I have no regrets. I did what I wanted to do and I appreciate that I had the opportunity.”

Austin Rivers Down to 3 Schools

Austin Rivers, the No. 1 player in the Class of 2011, has ruled out Florida and is now considering just three schools.

After initially committing to Florida as a junior at Winter Park (Fla.), the 6-foot-3 Rivers says the Gators are now out.

That leaves Duke, North Carolina and Kansas, all of which are involved in home visits.

St. John’s coach Steve Lavin picked up his second commitment Thursday night, and it was a huge one.

JaKarr Sampson, a 6-8, 190-pound small forward from Akron, Ohio who plays at Brewster (N.H.) Academy, verbally committed to the Johnnies on ESPNU.

“In the words of LeBron James I’m going to take my skills and talents to St. John’s,” said Sampson, who is friendly with James because they both attended St. Vincent-St. Mary High School.

Sampson later said in a phone interview he asked LeBron if he could copy the phrasing James used on “The Decision.”

“I was talking to LeBron,” Sampson said. “I asked him if it was OK if I used his words.”

Sampson, ranked the No. 12 small forward in the Class of 2011 by Rivals.com, chose St. John’s over Baylor and Tennessee. He chose the Big East school without ever taking an official visit, only an unofficial over the summer. 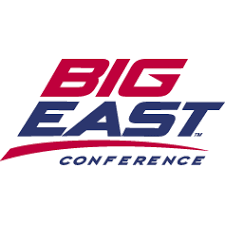 Traditionally, the Big Monday lineup begins with a BIG EAST game at 7 p.m. ET followed by a game from the Big 12 Conference on ESPN.  However, on the first week, two BIG EAST games will be shown on Jan. 17, the Dr. Martin Luther King Jr. holiday.  Villanova will play at UConn at 3:30 p.m. followed by Syracuse, last year’s BIG EAST regular-season champion, at Pittsburgh at 7:30.