Jermaine Sanders told everyone in the college 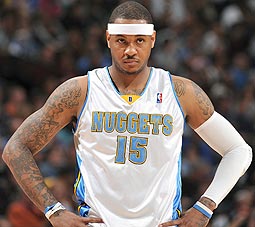 Carmelo Anthony has spoken and he says he “never” asked to be traded.

“I’ve never said I wanted to be traded. I never once said anything about trade talk,” Anthony said Monday at Denver’s media day, according to Benjamin Hochman of The Denver Post.

Of course, behind the scenes, the Nuggets are reportedly discussing a complicated four-team trade in which the Nuggets would receive Nets rookie power forward Derrick Favors, the third pick in the 2010 draft, Utah’s Andrei Kirilenko, who has an expiring contract, and two future first-round picks from the Nets, according to Adrian Wojnarowski of Yahoo! Sports. The picks would be New Jersey’s 2011 first-rounder and the 2012 pick the Nets own from the Golden State Warriors.

Felton Has Keys to Knicks’ Offense

GREENBURGH, N.Y. -- The Knicks made their

There is no shortage of visitors to Brewster (N.H.) Academy to watch senior point guard Naadir Tharpe.

“Oklahoma has offered,” Brewster coach Jason Smith said. “Coach [Jeff] Capel will be here today [Monday]. Kansas is involved and Coach [Bill] Self] will be here on Thursday. UCLA and Villanova have been in contact, too. St. John’s is still a school Naadir is interested in.”

UCLA made recruiting news on several fronts this weekend.

“Verbally committed to UCLA [Sunday],” Powell wrote on his Twitter.

Powell is ranked the NO. 16 shooting guard in the Class of 2011 by Rivals.