NEW YORK – Rafael Nadal is no 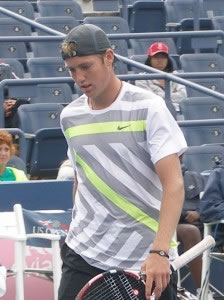 On Sunday he won the U.S. Open Junior Boys singles title with a 3-6, 6-3, 6-2 victory over fellow American Denis Kudla.

But despite that impressive pedigree, the 17-year-old Sock said he doesn’t feel any pressure to be the next great American tennis star.

“I don’t really feel much pressure,” Sock, who lives in Overland Park, Kansas and trains in Kansas City, said Sunday after his victory. “Hopefully we can get to that level one day and be in the American tennis spotlight.

“But we’re just taking it day by day and tournament by tournament and doing what we can. Hopefully we can get to that level some day.”

So two minutes after I posted the D’Angelo Harrison blog, Terrell Henderson of the Franchize All-Stars called me back.

He confirmed that four schools are still in the mix for the 6-foot-3, 190-pound shooting guard from Dulles (Texas) Fort Bend: Baylor, Marquette, Oklahoma State and St. John’s.

No official visits have yet been set, and Harrison has had one home visit with Marquette last week.

Tyler Harris Down to 5 Schools

He still has home visits Sept. 20 with  Iowa and St. John’s. A home visit with Wake could happen this weekend.

UConn is still on the periphery of Harris’s recruitment and head coach Jim Calhoun and Torrel Harris have a strong relationship, but because the Huskies have several wings in Jamal Coombs, Roscoe Smith and Niels Giffey, it is unlikely Tyler will end up there.

Source: Majok Working Out in D.C. 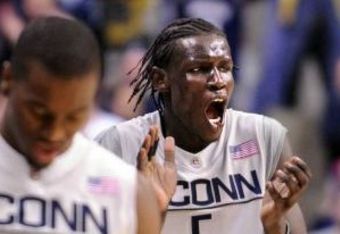 Former UConn big man Ater Majok is working out in Washington D.C. with an eye toward playing overseas, an NBA source with knowledge said.

The 6-foot-10 Majok has not had any official workouts with the Washington Wizards and, in fact, is not permitted to play in the NBA this season.

“He can’t be in the NBA this year since he wasn’t in the last draft,” the NBA source said. “He would be draft eligible next year. He would need [to be in] NBDL/Europe this year.” Majok could also play somewhere else overseas, such as Australia.

If Majok had gone through the 2010 draft process undrafted, he would have been eligible to be a free agent this season.

NEW YORK – For the third straight

The two players had a home visit last week with Baylor coach Scott Drew that Bello said was “good.”

The 6-foot-3 Bello and the 6-9 Miller both tripped to Louisville last weekend and enjoyed it.