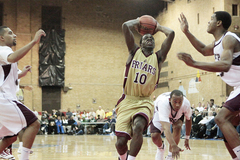 A year ago at this time, Elijah Carter was being recruited by low- and mid-level Division 1 programs, just hoping to get a scholarship to play ball. A year later, the 6-foot-2, 185-pound Carter is one of the hottest prospects available, as evidenced by the fact that Cincinnati, Rutgers, Oregon, Texas A&M and Charlotte wanted him to attend college this fall even though he has already said he’ll spend a prep year at Brewster (N.H. ) Academy. “He plays like Kyrie Irving,” one Big East assistant coach said, referring to the McDonald’s All-American from Elizabeth (N.J.) St. Patrick headed to Duke. “He’s best friends with Kyrie Irving. His game is similar to his. He’s not really a point guard. He’s more of a scoring guard but he can play the point.” Read the full story at SNY. (Photos courtesy Eric Harrield) Follow Adam Zagoria on Twitter