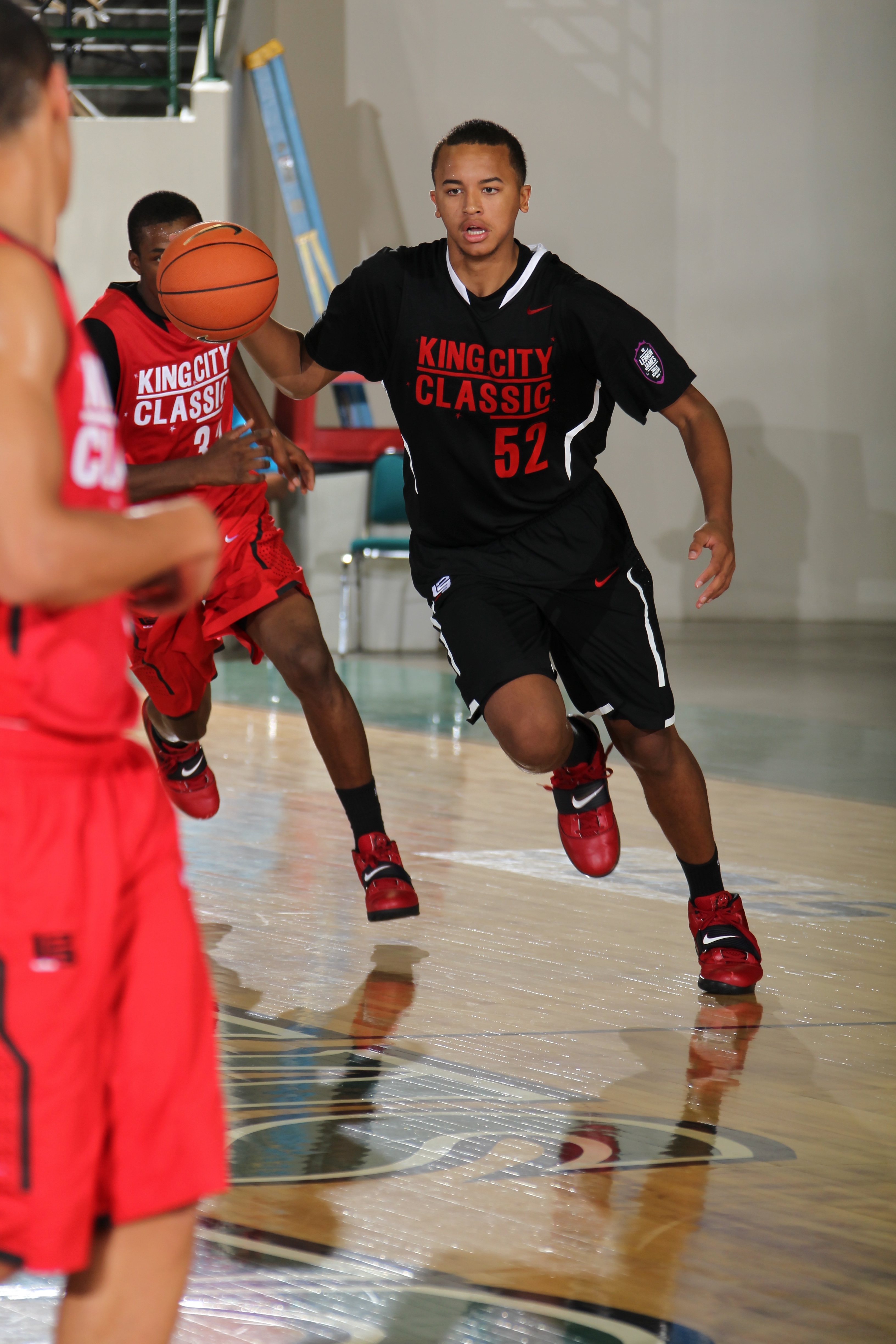 NORTH AUGUSTA, S.C. — Only one player at this week’s Peach Jam was in the top five in both rebounds and assists. That man was Kyle Anderson, a 6-foot-8 1/2, 220-pound rising junior from North Bergen, N.J. who runs with the Playaz Basketball Club. Anderson will play for Bob Hurley at St. Anthony after spending two years at the now-defunct Paterson (N.J.) Catholic. Raised by his father, Kyle Sr., as a point guard, Anderson creates tremendous mismatch problems for opposing teams. Although he has been accused of being somewhat slow-footed, Anderson uses his height to see over defenses and his length to attack the rim. One of the most cerebral players on the summer AAU circuit, Anderson averaged 15.5 points, 9.6 rebounds and 5.2 assists at the Peach Jam. In one game against Team Final of Philadelphia — playing without Kentucky-bound Michael Gilchrist — Anderson put up 20 points, 15 rebounds and 3 assists. “I think I’ve been able to score more, use my length to get buckets easier,” Anderson said. “I’m long so that’s an advantage. I’ve stepped my game up my scoring.” A year ago, Anderson played the point exclusively, but now that he’s grown he’s on the wing more. “He’s always been a pure point guard and looked to pass and not score,” said Kyle Sr., an assistant with the Playaz. “Now that he’s been moved off the ball and is on the wing more, he’s looking to score. And any coach knows that he’s a matchup problem. If you put a guard on him, he’ll go and post him up. If you put a big man, he’ll go around. He just has to get a more scorer’s ability. “Once he realizes he’s unstoppable, then he’ll be a lot better offensively.” Anderson’s stock is on the rise after a summer in which he helped the Playaz secure a top four seed at the Peach Jam. Now college blue bloods are coming to call. “Kentucky, Syracuse, Louisville, North Carolina are all involved,” Kyle Sr. Said. La Salle, Virginia Tech, Miami, Pittsburgh, Villanova, Rutgers, Seton Hall, St. John’s, Kent State, Louisville, Georgetown, Maryland, Xavier, DePaul, Michigan, Georgia Tech and St. Peter’s have all offered. North Carolina, Wake Forest, Baylor, Indiana, USC, Virginia, Oklahoma State, UCLA, Syracuse, Florida, Florida State and Kansas have shown interest. Asked about Kentucky, Kyle Sr. said, “[John] Calipari communicated to me that he wanted us to come down for a visit in August.” “We’ll get down to Kentucky for a football game in the fall,” he added. He added that “[Louisville coach Rick] Pitino said he loves him.” Still, Anderson said “North Carolina and Georgetown are probably my favorite schools because those are my first basketballs.” Anderson will also take an unofficial to DePaul Aug. 5 before the adidas Nations event in Chicago. “I’m very proud of what he’s done and how he plays and that he’s a good kid, great kid,” Kyle Sr. said. “But as far as the recruiting process right now, we’re not looking to do anything. It doesn’t matter who’s involved now. It matters who’s involved next year at this time.” Athletics run in Anderson’s family. Kyle Sr. played ball at Glassboro State. His uncle played football at Maryland-Eastern Shore. And his grandfather, Cliff, played on the offensive line on a Giants team that included Frank Gifford and Kyle Rote. Anderson will suit up for St. Anthony next season. Ironically, the Friars eliminated PC in the North Non-Public B title game this season at Rutgers. “That’s going to be a great opportunity playing for a Hall of Fame coach,” Anderson said. “Not a lot of people get to do that, so that’s going to be a great opportunity.” Anderson and former Paterson Catholic teammate Myles Mack will likely form the starting backcourt for Coach Hurley. “At least I know I left the family,” Anderson said, “but I’m bringing somebody else with me so I won’t feel all that bad.” Follow Adam Zagoria on Twitter

Why Roy Williams is Mad at Kyrie Irving