Hofstra has moved quickly to hire former Providence coach Tim Welsh as its new coach. The former Providence and Iona coach replaces Tom Pecora, who last week took the Fordham job. Welsh, a former SNY analyst, will get a five year deal and will be introduced Thursday at a press conference. “We have hired Tim Welsh as our new coach,” a Hofstra source said. Welsh spent 10 years at Providence but was fired after the Friars went 15-16 in 2007-08, with starting point guard Sharaud Curry limited to one game because of injury. Welsh led Providence to the NCAA tournament in 2001 and 2004, losing in the first round both times. He had a 160-143 record with the Friars. **Elsewhere on the Coaching Carousel, Fairfield coach Ed Cooley is interviewing today for the Boston College job. Cornell coach Steve Donahue will also interview today, sources said. BC coach Al Skinner was fired last week. **At Iona, sources said the list to replace Kevin Willard includes Fran Fraschilla, Steve Masiello, Fred Quartlebaum and Willard assistant Shaheen Holloway. **The McDonald’s All-American Game airs Wednesday night at 9 on ESPN. The game features several of the top uncommitted senior guards in the nation in Doron Lamb, Brandon Knight, Josh Selby and Cory Joseph. **Also at 9 on PBS is the magnificent documentary, “The Street Stops Here,” which chronicles Bob Hurley’s St. Anthony team of 2007-08 that went undefeated. Read my review of this terrific film here. (Photos courtesy Providence Athletics) Follow Adam Zagoria on Twitter

Steve Lavin Takes Over at St. John's; Pitino Gets Four-Year Extension at Louisville

Roberts in Play at Iona; Feinstein vs. Shaheen on Tourney Expansion; All-America Teams 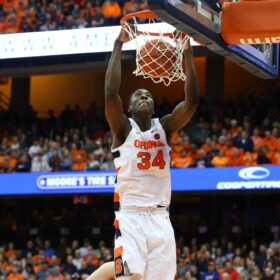