Tracy McGrady has played in a total of six NBA games this season while averaging 3.2 points and 0.8 rebounds, yet he ranks second among Western Conference guards in All-Star votes.

What’s more, McGrady could well be a member of the Knicks or another franchise by the time the NBA All-Star Game takes place Feb. 14 at Cowboys Stadium.

Consider that Knicks forward David Lee is averaging a double-double of 18.9 points and 11.0 boards (ninth-best in the NBA), yet isn’t even among the top 12 centers in the Eastern Conference in terms of votes.

“I think I have a shot (at the All-Star Game), but it’s not something I’ll worry about,” Lee told New York Post scribe Marc Berman. “The most important thing is our team is playing better and that makes a huge difference in that category. I’ll keep doing what I’m doing and hopefully we’ll get more victories before that time comes and we’ll see what happens.”

Terrence Ross, the No. 10 shooting guard 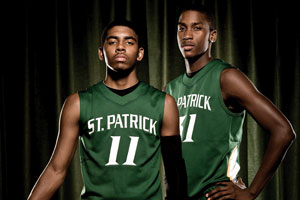 “I was just playing my game,” Gilchrist told the San Diego Union-Tribune. “It’s all about heart.”

Irving was named MVP of the tournament and Gilchrist and teammate Derrick Gordon joined him on the all-tournament team.

We may have seen Lance Stephenson’s official coming out party Wednesday night.

In a nationally televised game against No. 10 UConn, Stephenson hit two free throws with .7 seconds left to give Cincinnati a 71-69 home victory in the Big East opener for both clubs.

A highly touted freshman from Brooklyn, Stephenson dribbled into the lane in the final seconds and was fouled by Gavin Edwards at the buzzer. After a review, the officials put .7 seconds on the clock. Stephenson hit both and finished with 21 points.

“[In the] Xavier game I took a bad three-point shot, and I felt like Coach said I needed to drive the ball,” Stephenson said. “Today I did that, and it worked. And we won the game. Yeah, I think I got fouled. He forced me left, so I spun and the big man ran into me. I knew there was one second left and I knew there was a foul.”

Stephenson appeared to draw contact on the perimeter from UConn’s Jerome Dyson but the refs whistled Edwards for the foul on the interior. Alex Oriakhi was behind Edwards and ultimately blocked Stephenson’s attempt. 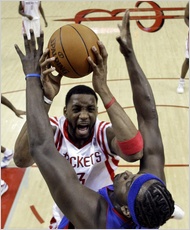 Tracy McGrady is officially on the market and the Knicks are officially intrigued.

McGrady, 30, has taken a leave of absence from the Houston Rockets while the team shops him and his $23 million expiring contract for suitable trade partners.

At 12-19, the Knicks are on the periphery of the Eastern Conference playoff race and a player like McGrady, despite his recent history of injuries, could vault them into the postseason.

“I think you always have to be intrigued with somebody the stature of Tracy McGrady,” Knicks Coach Mike D’Antoni told The New York Times on Tuesday when the Knicks beat the Detroit Pistons.

McGrady has averaged 21.9 points, 6.1 rebounds and 4.7 assists over his career but has played in only 101 games over the last two years.

UNBEATENS KEEP ON WINNING: Six undefeated teams were in action Tuesday night, and all six won, including two from the Big East: No. 1 Kansas, No. 2 Texas, No. 3 Kentucky, No. 4 Purdue, No. 5 Syracuse and No. 6 West Virginia.

JOHNSON, BUTLER MAKING STATEMENTS: Syracuse’s Wesley Johnson and West Virginia’s Da’Sean Butler will be in the conversation for Big East Player of the Year when all is said and done. Johnson put up 20 points and a career-best 19 rebounds Tuesday in Syracuse’s 80-73 victory over Seton Hall in Newark, N.J.

In Morgantown, West Va., Butler rebounded Jimmy Butler’s missed foul shot with 12 seconds left, dribbled up the court and drained a jumper just inside the 3-point line with 2 seconds left and two defenders –6-2 Darius Johnson-Odom and 6-6 Lazar Hayward — in his face to give West Virginia a 63-62 victory over Marquette.