ENGLEWOOD, N.J. — Sterling Gibbs is only a rising junior, but the Seton Hall Prep point guard may make the call on college this summer.

After scoring 16 points and grabbing 6 rebounds in the New York Panthers 59-58 semifinal loss to Team NJABC at the Joe Brown Memorial Tournament, Gibbs said he plans to take unofficial visits this summer to Oklahoma, Indiana, Villanova, Kentucky and Duke.

His father, Temple Gibbs, said his son could decide later this summer.

“We want to make a commitment by the end of the summer. I just want to get him set,” Temple said.

Barnes Does More Than Ball

During a recent unofficial visit to Stanford

Jessica Simpson Dumped, Back on the Market; Vetrone Wants to Name FDU Court After Green

Jessica Simpson is back on the market after Cowboys QB Tony Romo dumped her on the eve of her 29th b-day. Harsh.

In hoops news, Knicks guard Nate Robinson could be headed to Greece. Newsday reports that Olympiakos, the Athens-based team that last summer lured Josh Childress away from the NBA, has offered Robinson a two-year deal worth $10 million...Tobias Harris had 27 points and 11 rebounds to lift the Albany City Rocks to a 75-73 victory over the Louisiana Select in Peach Jam action on Tuesday…Pittsburgh guard Jermaine Dixon broke the fifth metatarsil in his right foot and will be out eight weeks. He will return in mid-September. It’s the same injury former Pitt guard Levance Fields and former Marquette guard Dominic James had…The semifinals of the Joe Brown Memorial tournament (formerly the Playaz Ball) will take place today at the Hoop Zone in Englewood, N.J.  The New York Panthers meet Team NJABC on one semi, and the Playaz take on Team Philly in the other. Semis at 2, championship at 3:45…Former Seton Hall big man Mike Davis is transferring to Coastal Carolina...Javon McCrea, a 6-6 wing from Newark, N.Y., has not committed to Georgetown, despite an Internet report to the contrary. A source close to the New England Playaz club said the Hoyas had not offered McCrea, who visited campus unofficially last week. 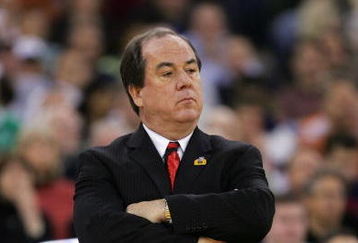 NEPTUNE, N.J. — It isn’t often that a basketball coach wants to dedicate his school’s court to the guy he replaced.

But that’s exactly what’s going on at Fairleigh Dickinson University in New Jersey.

Tristan Thompson: The Best Canadian Ever?; The Marvell Waithe Update

I just finished up a story for the upcoming issue of Basketball Times on Canadian forward Tristan Thompson and thought I’d mention a few things.

I covered the Texas-bound Thompson during his stint at St. Benedict’s Prep in Newark, when he was listed at 6-foot-8, 215 pounds. He’s now 6-10, 240 with a game that screams NBA potential. His mother, Andrea, said Tristan’s great-grandfather grew to 7 feet.

Thompson just returned Tuesday morning from an 18-hour adventure home from the FIBA U19 World Championships in Auckland, New Zealand. It was 13 hours from Auckland to Los Angeles and another five to his home in Toronto.

“I’m pretty tired,” Thompson said by phone. “I’ve been playing for the last four weeks non-stop so my body’s kind of tired. But I’ve been taking care of my body real well so I’ll probably need just two days to rest and I’ll be back in the gym working out.”

Tobias Harris the "Story of the Summer"

I spoke with a highly respected Big East assistant coach today and he couldn’t stop raving about Tobias Harris.

Harris, the 6-foot-8 rising senior forward at Dix Hills (N.Y.) Half Hollow Hills West, dominated at the LeBron James Skills Academy and was the sixth-leading scorer (13.3 ppg) at the NBA Top 100 Camp in Charlottesville, Va. Now he’s turning heads at the Peach Jam.

Harris has a slew of big-time coaches falling all over themselves to get him.

“He’s the best offensive forward in the country,” the coach said. “He can face up, he can post up, he can drive. He can do everything. If they took a picture of his body from last year and compared it to this year, he can make millions of dollars doing body sculpting or weight loss ads. He looks thin, quick and bouncy.

Which Set of Wildcats Will Land Gilchrist?

PHILLY — At one point last week, Kentucky coach John Calipari walked in the main door of the gym at the Reebok All-American Camp just past where Villanova coach Jay Wright was holding a conversation.

“Hey, it’s the two coaches who might land Michael Gilchrist standing right next to each other,” a bystander observed.

Then a coach joked that maybe Calipari and Wright could share the 6-foot-7, 219-pound Gilchrist, with one coach taking him for the first half of the season and the other for the second.

The consensus top player in the nation in the Class of 2011 and the Gatorade New Jersey Player of the Year, many people consider him to be the best player in high school basketball right now. Period.

Coached by Rafer Alston of the Nets, the New York Panthers won the U17 championship at the Hoop Group Summer Classic in Neptune, N.J. with an 84-63 victory over God’s Glory.

The Panthers played without Rod Odom (who was in Springfield) and J.J. Moore (back injury).

“It just means were still consistent,” Panthers head Gary Charles said. “Skip [Alston] came in and  did a nice job with these kids and he’s been practicing for three weeks. We’re extremely happy to be able to win the Reebok Summer Championship.”