Rutgers guard Mike Rosario dropped a career-high 54 points to carry Puerto Rico to a 90-89 victory over France in the FIBA U19 World Championship in New Zealand.

Rosario had 13 after one quarter, 28 at the half, 37 after three quarters and scored 17 fourth-quarter points to carry his team back after France had taken an 83-76 lead with 3:20 remaining in the game.

“I knew today was do or die for us,” said Rosario, whose team plays the U.S. on Tuesday. “That was a team we played in France and they beat us by one at the Douai Tournament, and I just knew that this game meant so  much to me, my country and my teammates.

Tiger Says Fed is the Best Ever

Woods proceeded to text his buddy and fellow Nike employee with this message, “Good job. Now it’s my turn.”

Woods won his own golf tournament but it didn’t add to his list of 14 majors. He remains four shy of Jack Nicklaus’ all-time mark of 18.

Yet with tennis legends Rod Laver, Bjorn Borg and Pete Sampras looking on at the All-England Club Federer won his 15th major and surpassed Sampras for first all-time among men. (Margaret Court-Smith won 24 and Steffi Graf 22).

Kidd to Remain with Mavs; 'Sheed to the Celts

Jason Kidd will remain with the Dallas Mavericks instead of coming to Broadway.

Kidd, 36, has agreed to a three-year deal worth more than $25 million to remain in Dallas, according to ESPN.com

The Knicks could only offer the midlevel exception — about $5.8 million per year — or about $19 million total.

“We are excited to have Jason Kidd back in a Mavs’ uniform,” Mavs owner Mark Cuban told the Dallas Morning News. “He was a major contributor for us last year and we expect more of the same next year.

“We also are excited to have him tutor Roddy Beaubois and J.J. Barea. This is hopefully the first of several deals to come in the next couple weeks.” 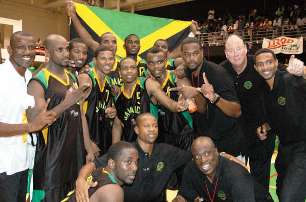 Louisville sophomore Samardo Samuels had 17 points and former Providence wing Weyinmi Efejuku scored 16 to lead Jamaica to a 65-61 victory over the British Virgin Islands in the gold medal game of the CBC Championship in Tortola.

Samuels, out of St. Benedict’s Prep in Newark, had 7 points in the first quarter when Jamaica took a 20-10 lead. Efejuku, who played at Rice, added 6.

The July recruiting period begins this week and several high profile camps are taking place, including the LeBron James Skills Academy in Akron, Ohio;  the Reebok All-American Camp in Philly; and the Hoop Group Elite Camp  in in Reading, Pa.

The Nike folks don’t release the LeBron roster until Monday, but here are some of the players who will be at the other events.

“I don’t have any answers for you now as to what’s happened, who’s responsible,” Aaron said.

Aaron said police have tentatively identified the woman but did not release her name.

“There are persons who were around the complex today, visitors, who have been taken to headquarters for questioning, just to see what they know, what they may have seen,” Aaron said. “No one is in custody right now.”