Summer in the City Notebook

I had several long and friendly chats with each of them and will have stories and blogs on them next week after I recover from tonight’s AC/DC show at Giants Stadium. In the meantime, here are a few quick notes:

**Tennessee’s Pearl and assistant Steve Forbes flew up on a private jet just to watch 6-6 senior forward JayVaughn Pinkston of Brooklyn Bishop Loughlin. Marquette, Arizona, Villanova, St. John’s and Miami are also in the mix for Pinkston, who dropped 19 on Grassroots Canada in Vegas. Pinkston said he won’t decide until the fall.

“Kimani [Young of New Heights] tells me [about the schools], but I realy don’t pay attention,” Pinkston said. “I just go out there and play. IF you think about it too much then you’re not going to do so well.”

Big Day on the Horizon with SITC & AC/DC

So I’m leaving my house tomorrow at around 9 a.m. for the Summer in the City event at St. John’s. We hear many big-time coaches, including Villanova’s Jay Wright, Tennessee’s Bruce Pearl, Marquette’s Buzz Williams and St. John’s own Norm Roberts will be on hand to check out the talent, including New Y0rk’s own Jayvaughn Pinkston.

From there I’ll take a subway to Madison Square Garden to meet my boy Jay Dahl, who I went to elementary school with and once had us re-pick the kickball teams on the playground because one of our friends was upset and crying over the teams. I’ll never forget how cool and great that was on Jay’s part.

Norm Roberts woke up in an Orlando hotel room at 4:15 a.m on Thursday, skipped his daily shave and slept during his 7 a.m. flight to
Kennedy Airport.

Over the past month, the St. John’s coach has been out on a recruiting adventure that took him to Reading, Pa.; Cleveland; Philadelphia; Springfield, Mass.; Augusta, S.C.; Las Vegas and Orlando, Fla.

For the third consecutive year, the world’s best basketball players will travel to the Northwest to compete in the NIKE Global Challenge, held once again at Liberty High School in Hillsboro, OR from August 7-9.  The tournament will feature International teams such as Euroleague junior tournament champion FMP-Serbia, the SEEDs Academy from Senegal, an all-star team from NIKE’s All-Asia Camp, Brazil and Canada, as well as three teams made up of the top players from the United States. 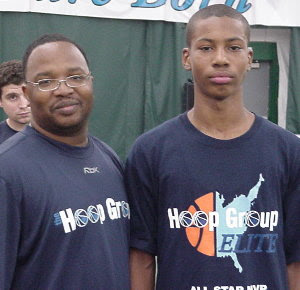 Two players out of Queens who are drawing a lot of attention this summer are Omar Calhoun and Maurice Harkless.

Calhoun is a 6-foot-4 sophomore guard out of Christ the King High School who plays for the Gauchos AAU program (at right in the picture courtesy RealScout.net).

Calhoun averaged about 29 points per game to help the Gauchos 15U team reach the Final Four of the AAU Supershowcase in Orlando.

His team also won the Gold bracket championship at the King James Classic in Ohio. And Calhoun made the all-tournament team at the Bob Gibbons Tournament of  Champions.

Here’s the infamous video of former Knick Stephon Marbury listening to gospel music and crying…During the full video, taking in some entertainment room in his house, he reportedly gave shout outs to Knicks GM Donnie Walsh and Anucha Browne Sanders, the Knicks official who won a sexual harassment suit against Isiah Thomas and the Garden. It’s pretty bizarre…Steph clearly needs some help and we hope he finds it.
And here’s a spoof that’s equally disturbing….

Villanova guard Reggie Redding was busted by Radnor Township police Tuesday morning with a small amount of marijuana and drug paraphernalia, according to Philly.com.

The 21-year-old Redding was released and issued a summons to appear in court.