There is good news for fans of Fordham basketball. Jio Fontan, a 19-year-old point guard out of St. Anthony in Jersey City, has decided to return to campus for his sophomore year and play with the Rams. “When he came home from New Zealand he felt he had great momentum from how the tournament went and he felt it was best not to sit out a year. He wanted to reconsider the Fordham situation. He’s excited and so is his family and Fordham University,” a source close to the family said. Fontan and Rutgers guard Mike Rosario both played with Puerto Rico at the FIBA U19 World Championship in Auckland, New Zealand. Both played well and the Fontan family felt it was best for Jio to continue with that momentum. Jorge Fontan, Jio’s father, previously said his son would never play for Fordham again. The family had tried repeatedly to secure a release from Jio’s scholarship, but were not granted one. Fontan briefly considered remaining in Puerto Rico and training or spending a year at a junior college without playing. Fontan led the Rams in scoring (15.3 points per game), assists (4.7) and steals (33) while adding 2.7 rebounds per game. He was named to the Atlantic-10 All-Rookie team. Fordham finished 3-25, 1-15 in the A-10. Fordham is bringing in a strong recruiting class, including many players looking forward to playing with Fontan. The recruiting class includes 6-10 Fahro Alihodzic and 6-4 Danny Thompson, both of the Canary Basketball Academy;  6-3 Lance Brown of Paterson (N.J.) Catholic; 6-7 Chris Gaston of New Hampton (N.H.);  6-8 Brian Freeman of Potomac (Va.) Potomac Falls; and 6-4 combo guard Brennen Melvin of Bishop Verot (Fla.). “Finding a high-level point guard to lead your team is one of the most important things in recruiting,” La Salle coach Dr. John Giannini said. “Having Jio on your team gives you a much needed talent  at a critical position. With Jio and their ’09 recruits and ’10 commitments, they have some very talented young players and a lot of hope for the upcoming season.” RUTGERS LANDS NICHOLAS 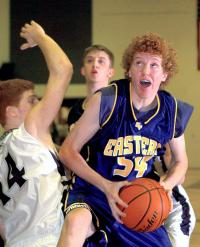 Rutgers landed its second commitment from the Class of 2011 Monday when Andrew Nicholas, a 6-6, 205-pound wing from Eastern York (Pa.), verbally committed to head coach Fred Hill. “I committed to Rutgers,” Nicholas said by phone. “The first time I met Coach Hill and Coach [Jimmy] Carr, we had a bond right away. We connected. Coach Hill is straight up and honest with me and my parents.” Mascei Grier, a point guard from Las Vegas who is the son of former Passaic (N.J.) High legend Marshall Grier, previously committed to Rutgers and is also in the Class of 2011. Nicholas had several other Division 1 offers to choose from. “I had offers from Virginia Tech, St. Joe’s, Penn State, Temple and Georgia Tech,” Nicholas said. A left-handed shooter, Nicholas reportedly averaged 21.2 points last season and made 63 3-pointers en route to earning Pennsylvania Associated Press Third-team Class AAA All-State honors. He has 1,169 career points. “He’s an excellent shooter,” said Tony Sagona, Nicholas’ AAU coach with the Jersey Shore Warriors. “He’s got great range. He gets it off very quickly and he’s lefty. That gives him an edge.” ‘ Nicholas said he wanted to get the recruiting process over with early so coaches would stop calling him. “It was really stressful with all the college coaches calling me all the time and I knew I wanted to go to Rutgers so I figured why not get it over with?” Nicholas said. “It seems like the perfect fit for me.” RUTGERS TO PLAY ARMY IN FOOTBALL AT YANKEE STADIUM The STar-Ledger reports that Rutgers and Army will play football at Yankee Stadium in 2011. Follow Adam Zagoria on Twitter.