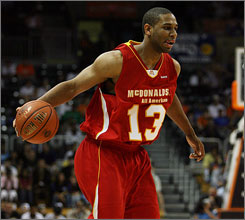 This much seems certain now. Xavier Henry is staying at Kansas. Lance Stephenson is headed to Cincinnati. And Lance will not end up at Kansas in place of Xavier. After meeting with his family and Kansas coach Bill Self Tuesday night, Henry texted various outlets to let them know he will be a Jayhawk for at least next season. “I’m going to Kansas,” Henry texted to FOXSports.com late Tuesday night. “That’s final.” As reported earlier, Carl Henry had initially told a Kansas City radio station that his sons could end up at Kentucky instead of Kansas. All seems settled — at least for now.