Seton Hall has high hopes that either Ferrakohn Hall or Cliff Dixon will announce soon and add to is frontcourt depth.

Hall, 6-8, 210-pound forward from Memphis White Station High School , will announce his decision on Friday at his school. Jerry Meyer of Rivals says Hall will select either Baylor, Seton Hall or UAB.

He is headed to Western Kentucky for an official visit Friday and also plans to visit Missouri and Memphis.

The NBA Draft just got a little deeper.

Stephen Curry of Davidson, the North Carolina duo of Ty Lawson and Wayne Ellington and UConn big man Ater Majok all declared Thursday for the draft. Curry, Lawson and Ellington are juniors, while Majok has yet to play a game at UConn.

“When I came here I thought it was going to be for four years with my teammates and my class, graduating and things like that. That’s hard to walk away from before I have to,” Curry said at his press conference.  “It took a very positive, beneficial next step for me, an opportunity for me, to give that up. It’s going to be hard to walk away from it.”

Xavier Henry made it official on Thursday.

The 6-foot-6 wing announced at a press conference at Putnam City High School in Oklahoma City that he and his brother will play for Kansas coach Bill Self next season.

“Next year, I’ll be taking my game to Kansas,” Xavier Henry said in his opening statement at the news conference, according to Gary Bedore of the Lawrence Journal. “That’s all I’m going to say.”

Henry, the No. 3 shooting guard in the Class of 2009, initially chose Memphis over Kansas last November, but after John Calipari took the Kentucky job, Henry asked for his release.

For the past several weeks, the process turned into a soap opera as the Henrys publicly discussed their options: remaining at Memphis, following Calipari to Kentucky or going with Xavier’s original pick of Kansas.

No matter what happens with point guard Jio Fontan at Fordham, Chris Gaston and Lance Brown say they will honor their commitments.

“No matter what happens I’m committed to Fordham, the 6-foot-7 Gaston said Thursday by phone from New Hampton prep.

“I can’t wait to play with Lance Brown and all the other kids that committed and signed. We all built a relationship in this short amount of time. We all talk to each other.”

High School Junior Heading to the Pros; Dennis to Baylor; Slice to Kentucky? 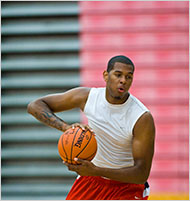 In perhaps the most significant development on the basketball front since Kevin Garnett jumped from high school to the pros in 1995, Jeremy Tyler announced that he will skip his senior year — of high school — to play professionally in Europe.

Projected as the No. 1 pick in the 2011 NBA Draft, Tyler had initially committed to Louisville but instead will play in Europe for the next two years to improve his level of play and maturity.

Tobias Harris, a 6-foot-8 junior forward, was named the New York State Class A co- player of the year, according to Syracuse.com.

Harris shared the honor with Syracuse-bound guard Brandon Triche of Jamesville-Dewitt, who averaged 23 points per game.

The two players faced off last month when Harris scored 27 points and added 15 rebounds to lead Long Island Lutheran to a 68-51 victory in the Class A Federation title game. Harris later transferred back to his old school, Half Hollow Hills West.