Lance Stephenson told Jerry Meyer of Rivals that he would like to visit UCLA and Wake Forest before making a final decision, but no visit dates have been set. The 6-foot-5 Stephenson is practicing this week with the Lincoln Railsplitters and will head to Kansas this weekend for an official visit that will include watching Saturday’s game against Nebraska. Stephenson, who on Sunday night became New York State’s all-time leading scorer when Lincoln won its fifth straight Brooklyn Borough championship, is also considering Maryland, St. John’s and USC, and recently took an official to Maryland. Stephenson recently told me he had no immediate plans to visit any other schools. “As of right now, no,” he said. “The list that I gave everybody, I’ll make sure I go to all of them. But right now I’m just worrying about Kansas and my season.” [Speaking of Maryland, Terps signees James Padgett and and Jordan Williams will participate in the Charm City Challenge at the Towson Center in Baltimore April 5. Lincoln coach Dwayne “Tiny” Morton will coach the U.S. team.] Stephenson said he might declare his college choice after the PSAL championship at Madison Square Garden March 21. Obviously, if he were to visit Wake and/or UCLA after the season, he could not announce on that date. 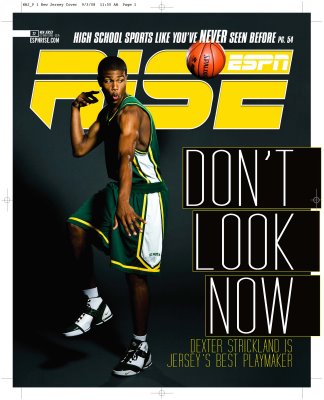 ***In other Stephenson news, the  organizers of the Senior Showcase April 18 in Orlando have reached out to Lance to see if would like to play in the event. St. Patrick senior guard Dexter Strickland, who is headed to North Carolina, verbally committed to play in it. Organizers are also seeking to get Villanova-bound guard Maalik Wayans. MCDONALD’S ANNOUNCEMENTS Both Stephenson and Strickland were shut out of the Jordan Brand Classic April 18 at Madison Square Garden, yet both were invited to play in the McDonald’s All-American Game April 1 in Orlando. The official Mickey D’s  rosters will be announced Wednesday at 6 p.m. on ESPNU. Here’s one McDonald’s list floating around: Dexter Strickland Lance Stephenson Abdul Gaddy Avery Bradley Alex Oriakhi Maalik Wayns Dominic Cheek Tommy Mason-Griffin Kenny Boynton Ryan Kelly Xavier Henry Keith “Tiny” Gallon Donte Taylor Wally Judge Demarcus Cousins

***Former St. Benedict’s forward Tristan Thompson is enrolled at Findlay (Nev.) Prep and could play Friday against Duncanville (Texas) in Dallas. “They’re playing as a team and I like their style, kind of like when Mike D’Antoni coached the Phoenix Suns,” the 6-8 Texas-bound Thompson told the Las Vegas Sun. “The coaches are great and it’s like a family. I’m happy to be here. “I’m real excited. I’ll just be another tool in the tool box.” Said Findlay assistant coach Todd Simon: “He’ll be in uniform this weekend in Dallas. Whether or not he plays remains to be seen.” Thompson was booted from the St. Benedict’s team last week and ended up at Findlay because his Grassroots Canada teammate Cory Joseph, a 6-3 junior point guard and Thompson’s friend, plays there. “Louisville, Ohio State, Memphis, Texas A&M and Florida are recruiting him,” Simon said of Joseph. “He’s got a whole list of suitors. Louisville, Texas A&M and Ohio State are three of the more aggressive on this end.” Findlay Prep, No. 1 in the RivalsHigh 100, and St. Benedict’s could end up facing off in the ESPN/Nike National Invitational set for April 3-5 in Washington, D.C. Those two programs will join Oak Hill (Va.) Academy, Montrose (Md.) Christian and four others to determine a national champion. “By then Tristan may see more minutes,” Simon said, adding that the team has a core of eight guys who have jelled throughout the season. “But these are the guys who have been in the trenches since Day One.” NIKE HOOP SUMMIT ROSTER  (April 11, Portland, Ore.)