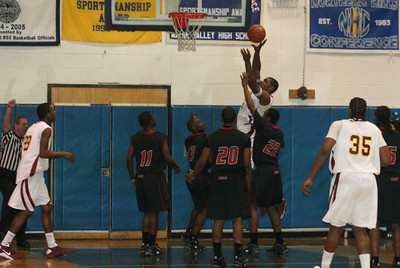 PATERSON, N.J. – Could this be the year Paterson Catholic finally takes down St. Anthony?

Based upon the Cougars impressive performance in beating Paterson Kennedy 81-64 to win their second straight Passaic County championship Saturday at Wayne Valley High School, it looks like they could beat anyone on a given night.

“I think they can beat a St. Anthony,” Kennedy coach Jim Ring said. “They have the talent that they could get there [to the Tournament of Champions]. They’re very, very good. They’re the best team we’ve played all year. Case closed. No one’s even a close second.”

1:18 – IT’s all over except the Fat Lady. PC leads 81-59. Mack has 23, James 21 and Edwin 20 for the Cougars. Fordham-bound wing Lance Brown has just checked in for PC and promptly hit a 3-pointer from the wing. He had been out with a knee injury.

1:02 – Myles Mack is on fire. The sophomore point guard just scored seven straight points and 11 of PC’s last 15 as the Cougars now lead 62-46 after three. He scored a bunch of points on transition baskets and one off a steal

Maryland in Hot Pursuit of Stephenson

If you don’t think Maryland is serious about landing Lance Stephenson, consider this.

Lincoln opens defense of its PSAL title on Tuesday.

Maryland head coach Gary Williams previously watched the 6-foot-5 Stephenson, ranked No. 1 in the Class of 2009 by Hoop Scoop and No. 9 by Rivals, when he dropped in a career-high 50 points on FDR in the Brooklyn Borough championships.

Check out Part 1 of my three-part

Must See TV? Not for the Big East Tournament

If you’re hoping to see the first round of the Big East Tournament on March 10, you’ll have to either get a ticket to Madison Square Garden or watch the games online.

The first-round games — which could potentially include a Rutgers-Seton Hall ‘Sopranos’-Style Showdown — won’t be shown on SNY, MSG or ESPNU.

ESPN will televise the last four days of the event, including Saturday night’s championship game.

ESPN owns all the rights to the tournament and a spokesman for The Worldwide Leader said “a combination of factors” is responsible for the games not being televised.

“It is a combination of factors,” Michael Humes said. “The format of the tournament was changed after we reached our agreement with the conference and these four games, and extra Tournament day, are in addition to content beyond what we committed to televise. Also, our main Championship Week networks are packed with other commitments.

Here are Tim Pernetti's comments on the

But it wasn’t until Neil passed away last weekend after a two-year battle with cancer that Kevin truly understood the impact his brother, 48, had on so many lives.

Thousands of people, including New Jersey Gov. Jon Corzine and all the members of the St. Patrick basketball program, attended the funeral on Wednesday to pay their last respects to Neil, a highly respected business agent with the International Brotherhood of Electrical Workers Local 102.

Here are couple of other notes off the game itself: