On the same night he was left off the Jordan Brand Classic roster, Lance Stephenson dropped a career-high 50 points as Lincoln routed FDR 113-78 in the first round of the Brooklyn Borough Championships. And he did it with Maryland Coach Gary Williams looking on. The 6-foot-5 Stephenson took an official visit to Maryland two weeks ago and now includes the Terps on his short list along with St. John’s, Kansas and USC. “They’re kind of high on my list,” Stephenson told me last week. “I didn’t go and  visit all the other schools. I just visited that school. It’s the first official visit. I’m just going to see what the other schools look like and pick by that.” If Williams could somehow land Lance, stealing him out from under St. John’s eyes, it would be a major coup for a coach facing major heat for losing high-profile recruits Gus Gilchrist and Tyree Evans. 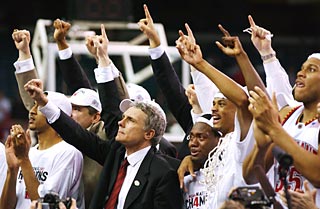 Williams hasn’t had much success recruiting in recent years. Since winning the 2002 NCAA title, he has signed just two prospects ranked among the nation’s top 50 in Rivals.com’s annual recruiting rankings The good news for Williams is that Maryland-bound senior forward James Padgett had 17 points and 13 rebounds in the blowout. St. Francis-bound point guard Darwin “Buddha” Ellis hit four 3-pointers and broke Vincent Council’s school record with 24 assists. Stephenson previously told me it would be a “good look” for both he and Padgett to play for the Terps. “That’s a good look for me and him to go to,” he said. “I’m just looking at different schools and trying to see where the best fit is.” Lincoln is the three-time PSAL city champ and the two-time New York State Federation champ. Stephenson hopes to close out his career with a fourth straigth city title and said he then planned to make a college announcement “right after that.” Before then, the Railsplitters have a big weekend ahead with games Thursday (Borough semifinals); Friday (St. Patrick in the Nike Super 6 at Fordham); Saturday (Westchester in the Primetime Shootout in Trenton, N.J.); and then potentially Sunday in the Borough championship game. The St.  Patrick game will be telecast on ESPNU on Friday at 7. **In other Maryland news, Keith Booth was at St. Anthony in Jersey City watching Long Island Lutheran down St. Anthony 60-58. The Terps are looking at junior forward Tobias Harris and sophomore wing Achraf Yocobou of Long Island Lutheran. Check back in a bit for a longer post on this game with recruiting notes.