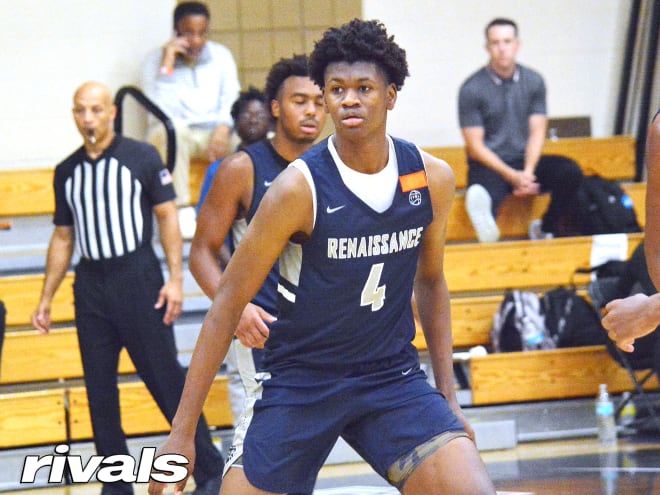 By ZACH SMART Tyler Betsey’s ability to shoot the ball and trigger game breaking scoring onslaughts is widely known.  The Class of 2024 wing, now at St. Thomas More )CT), morphed into the mad bomber during Peach Jam this summer. Betsey bolstered his high-major stock, turning in multiple games of five 3-pointers or more while playing with the New York Rens. Having added muscle onto a once bone thin frame, Betsey has become more of an all-around scoring threat and a guy who clamps down on guards. Unique for his two way versatility at 6-foot-8, Betsey said he is hearing from Rutgers, Indiana, Duke, and UConn the most. “UConn a lot,” said Betsey of the program he’s been in most consistent contact with. “It’s really coach (Tom) Moore and coach (Dan) Hurley I’m talking to from there,” Betsey explained, adding that Connecticut’s staff has been in to see him multiple times this season. “With the Rens, they have a great relationship with (NYC native and UConn assistant) Kimani Young. I’m really just looking for a program that gives me the freedom to be me.” The Windsor, Conn. native recently took in Rutgers’ thorough 76-46 throttling of Rider back on Nov.22.  “Coach (Steve) Pikiell at Rutgers, he really just let’s his guys go,” Betsey said. “If I go there, I would have the ultimate freedom. They’ve been on me since the summer. Coach (Karl) Hobbs as well. Coach (Brandin) Knight was recruiting me all summer, that’s my guy right there.” Betsey is likely to visit Indiana next. “They have an NBA coach, and the assistant coach is really tight with me,” Betsey told 247. “They text me every other day, so they show me that they really want me. It’s just an iconic basketball place. The striped pants and all, everybody knows [about] Indiana.” Duke, which is also recruiting Betsey’s New York Rens 16s teammate Dylan Harper, a 6-foot-7 point guard and son of former NBA champion point guard Ron Harper, has also been in active pursuit of Betsey. Longtime St. Thomas More Prep coach Jere Quinn cited Betsey’s work rate and ability to buy into the team component and emphasis on defense as aspects translatable to the next level of play. Betsey always wants to be neutralize the opposing team’s top scorer, regardless of the position. Betsey’s boundless energy as a multi positional defender paid dividends this summer, as he helped spearhead a Rens team teeming with young talent. “What impressed me even more than Tyler’s shooting was how he was able to sit down and guard point guards,” Rens head coach and director Oz Cross said. Betsey was able to apply confrontational on ball pressure on numerous Top-25 ranked players, bottling them up with his length. “He just did a heck of a job containing those guys,” Cross explained. Follow Zach Smart on Twitter Follow Adam Zagoria on Twitter Follow ZAGSBLOGHoops on Instagram And Like ZAGS on Facebook