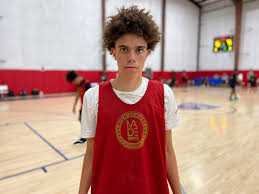 By ZACH SMART Class of 2025 guard Darius Adams has made conditioning and physicality a livelihood, ascending the rankings to become a four-star recruit in his class. Adams, 6-foot-3 combo guard, has added muscle to his once spindly 175-pound, becoming the focal point at Manasquan (NJ) High School. During his freshman season, Adams scored 20 points or more in 10 gmes. Playing with the PSA Cardinals on the Nike EYBL circuit, Adams was able to break open games with his scoring while simultaneously proving himself as a game manager capable of engineering a high scoring, quick paced attack.  The New Jersey product is being prioritized by several high major programs during the early stages of his recruitment process.
Rutgers, Seton Hall, Syracuse and St. John’s have all offered, while Tennessee, Virginia and Maryland are all expressing high interest in Adams. “Darius is tracking as one of the best combo guards in the country,” PSA Cardinals Director Terrance “Munch” Williams said. “His development on both ends of the court have taken a huge leap from his ability to get stronger in the past six months. He has gone from a killer with his actions to a flat out stud in every sense of the word. With his off the court discipline, he is positioning himself to play the game of basketball at its highest level.” Adams is a heady passer who sees the floor and knows how to deliver timely reads and hit open teammates.  Adams has a rarefied purity of vision for his age.  He’s able to draw in defenders and deliver no look feeds to open teammates. Adams’ 25-point performance during the Jersey Live event this summer, against Hudson Catholic helped trigger the Seton Hall offer.  Seton Hall head coach Shaheen Holloway was in attendance watched the game from start to finish. Seton Hall has been in persistent pursuit of Adams, who recently visited the campus and watched the team’s game against Iowa. A combination guard, Adams is the latest in a long lineage of guards to come out of the PSA Cardinals program. PSA also features a national level point guard in five star, highly coveted recruit Boogie Fland of Stepinac High School in White Plains, NY. In transitioning to a role that’s ramped up in importance as a sophomore, Adams said his primary concern is winning and making the right reads. “I think becoming a leader is part of the process,” Adams said. “Making the the right play. I think I have an IQ for that. I would say that’s one of the best attributes of my game overall.” Adams recently took an unofficial visit to the University of Virginia. “They are recruiting me as a point guard,” Adams said. “My parents and I spoke with coach (Tony) Bennett for a while. It was great to see him coach and get the win (against Monmouth).” Adams added that it was nice to get recognition from in-state schools. He listed Rutgers as a program that’s been early and active in his recruitment. “Coach (Steve Pikiell) came to my open gym in the fall,” Adams said. “He told me that I’m talented and he envisions big things for me and in my career moving forward. He told me to just keep working.” Follow Zach Smart on Twitter Follow Adam Zagoria on Twitter Follow ZAGSBLOGHoops on Instagram And Like ZAGS on Facebook