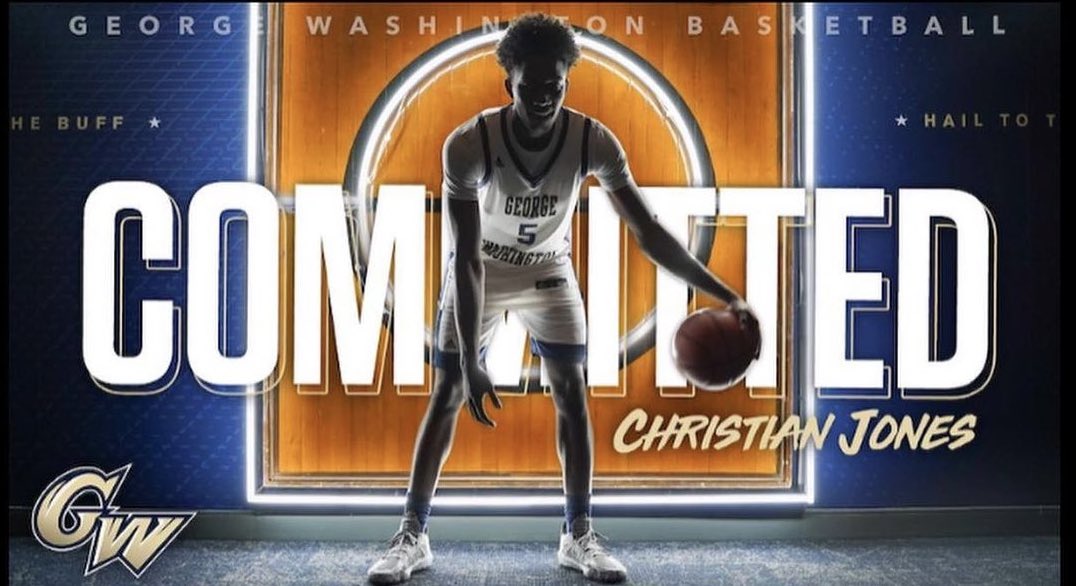 By ZACH SMART After narrowing his choices down to three schools, Our Savior Lutheran Class of 2023 guard Christian Jones has committed to George Washington. The opportunity for an immediate impact and Jones’ relationship with first year GW head coach Chris Caputo, a New York City native who played at Archbishop Molloy, factored into Jones’ decision. The three-star prospect wound up choosing the Atlantic 10 program over Cal and Charlotte, as he had whittled his list down to those three. Jones had high major offers from a number of programs, including Seton Hall. As a deft left-handed shot maker, the 6-foot-5 Jones brings a wealth of experience on some of the biggest stages. Jones has been a poised scorer throughout his career at the Bronx-based national power, playing off the ball alongside Jaquan Sanders (Seton Hall) the last two years. As a crafty, smooth finisher who is able to glide to the rim, Jones is a veteran presence on an OSL team that’s added Bed-Stuy native Ty-Laur Johnson (deciding between North Carolina State, Memphis and others) and 7-foot UConn commit Youssouf Singare. Jones’ ability to not only spread the floor out with his shooting but also constantly win throughout his career is what makes him a unique recruit. During his time at OSL and also on the AAU circuit with New Heights, Jones has won and won often. “Christian is the ultimate leader and one of the most coachable kids,” said Malcolm Pope, an assistant coach at OSL under Pete Wehye. “The coaches know he shoots the ball well and takes care of the ball, but they are starting to appreciate the fact that he’s a winner. He’s always won to get to the biggest stage to be able to get noticed.” The backcourt is an area of need moving forward for GWU. Jones joins upstate New York native Trey Autry, a 6-foot-3 guard at Western Reserve Academy (Oh.) in building up the Colonials future backcourt. A slick passer who has added to his all around offensive repertoire with a mid range pull up and a downhill game, Jones is the second OSL player to commit in as many months. Singare recently committed to UConn. Beyond Johnson, the OSL program has another highly touted prospect in 6-foot-6 bulldozer built wing Jahmere Tripp. An explosive finisher with guard skills and an ability to step out and knock down the 3-pointer, Tripp is a multi-layered Class of 2023 prospect. Tripp holds offers from Hofstra, Rhode Island, Missouri State, Towson and others. OSL also had another guard commit recently, as 6-foot-4 senior Armoni Zeigler committed to St. Peter’s. An electrifying open court finisher, Zeigler is an outside shooter with a knack for hitting tough, tightly contested shots. Follow Zach Smart on Twitter Follow Adam Zagoria on Twitter Follow ZAGSBLOGHoops on Instagram And Like ZAGS on Facebook