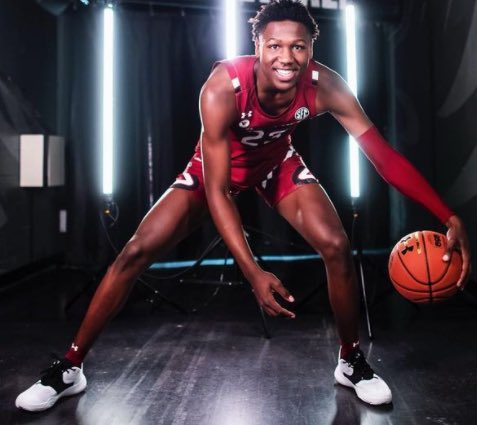 By SAM LANCE GG Jackson, the No. 1 overall player in the Class of 2023 per 247Sports, has officially reclassified to the class of 2022 and committed to South Carolina. The announcement came via his Twitter page.

I will like to announce that I will be reclassifying to the class of 2022, committing to the University of South Carolina to further my career and education. NOW LETS HAVE FUN FAMS!🤙🏾🐔 #HometownHero

“I will like to thank the man above, God, himself for blessing me with the talent and gift to play the game of basketball,” Jackson said in his announcement on Instagram. “I want to thank my entire family for always staying by my side no matter how hard things got and always helping me.” The 6-foot-9 forward attended Ridge View High School, which is just 30 minutes northeast from the University of South Carolina campus. On both of his social media platforms, the forward used the hashtag “hometown hero.” Jackson, who plays for the Team CP3 AAU program, previously became the first decommitment from North Carolina in the modern recruiting era. While reclassifying, Jackson still remains eligible for the 2023 NBA Draft, as his December 2004 birthday barely marks him one year removed from his graduating class. Jackson joins two three-star players — power foward Daniel Hankins-Sanfordbe and point guard Zachary Davis — in South Carolina’s 2022 recruiting class. Jackson is a huge get for head coach Lamont Paris, who was recently hired at South Carolina in late March. Jackson will also join incoming transfers Meechie Johnson Jr., Ebrima Dibba, and Hayden Brown. Follow Sam Lance on Twitter Follow Adam Zagoria on Twitter Follow ZAGSBLOGHoops on Instagram And Like ZAGS on Facebook