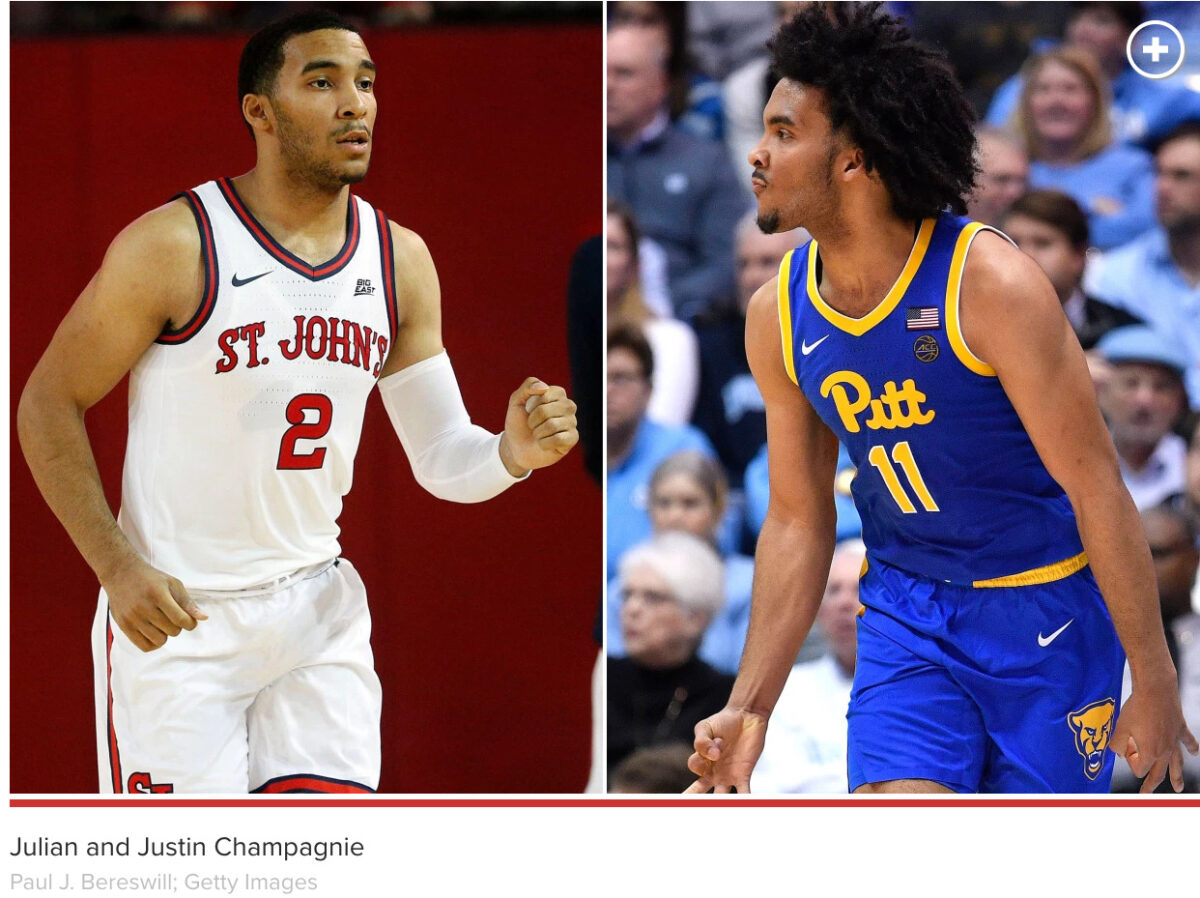 By ADAM ZAGORIA Justin Champagnie beat his twin brother Julian into the world by 11 minutes on June 29, 2001, and 20 years later he beat him to the NBA by a full year. Justin declared for the NBA Draft after his sophomore season at Pittsburgh, but went undrafted. He then signed a Two-Way Contract with the Toronto Raptors last August. A year later, Julian left St. John’s, also went undrafted and ultimately signed a Two-Way with the Philadelphia 76ers. On Saturday night, the twins who were born in Staten Island and grew up in Brooklyn will meet for the first time as pros in the NBA Summer League in Las Vegas when the Raptors meet the Sixers (3:30 p.m., NBATV). “It’s pretty cool. Lifelong dream, so why not do it together?” Julian, a 6-foot-8 guard who averaged 19.2 points and 6.8 rebounds last season at St. John’s, said in a recent phone interview. Asked if they might guard each other in the game, Julian said, “No clue, whatever the coach asks me to do.” The game will mark the twins’ first time sharing a court since they played together at Bishop Loughlin High School in Brooklyn. Pitt and St. John’s met last Dec. 18 at Madison Square Garden, but neither brother played. Justin was already in the NBA and Julian missed the game with COVID-19. Now they will finally share a court again. Julian said he didn’t expect his parents, Christina and Ranford, to be there but he wasn’t sure. Still, plenty of eyes will be on the game. “Saturday will be a day that their entire family will remember forever,” said Adam Berkowitz, the director of the New Heights AAU program for which the twins played. “Talk about a dream come true.” The Champagnies aren’t the only twins in the NBA. Caleb Martin plays for the Miami Heat, while his twin brother Cody Martin is on the Charlotte Hornets. Robin Lopez is on the Cleveland Cavaliers, while his twin Brook Lopez plays for the Milwaukee Bucks. Jimmy and Buddy Boeheim, who are not twins but played together last season at Syracuse under their father, legendary coach Jim Boeheim, are playing for the Detroit Pistons in Summer League and debuted Thursday with a midnight tip time on ESPN against the Portland Trail Blazers. “We’re not used to watching them play together side-by-side so it’s surreal and we’re forever grateful for this moment today right now,” Juli Boeheim told ESPN’s Cassidy Hubbarth at the game. “It’s just exciting to see them get a chance,” Jim Boeheim said. “The NBA is so hard, just to get an opportunity to play in the NBA is unbelievable. I’m proud of them both.”

Jim & Juli Boeheim in attendance at the #NBA2K23SummerLeague to watch their sons Buddy & Jimmy Boeheim make their #NBASummer debut 💕 pic.twitter.com/TGOdezIADT

Another set of brothers is also in Summer League with Trey McGowens on the Clippers roster, and Bryce McGowens playing with Charlotte. As for the Champagnies, Julian had to wait a year to follow his brother into the league. He went undrafted but his agent, Nick Blatchford, called him about 5 minutes after the Draft and said, “Congrats, you’re a 76er.” “After that, the emotions came out,” Champagnie said of the call. “It feels great, it’s been a dream of mine to play in the NBA,” he added. “Honestly, no matter which way you get it, however you get it, it’s a good feeling.” Champagnie was the leading man at St. John’s the last few years and was an All-Big East selection this past season but knows his role in Summer League is different. He just wants to “show them that he can be a valuable piece to their team.” “I don’t have to do everything I was doing in college,” he added. “I think it’s more of filling a role until God willing I work my up and become one of those guys.” Champagnie is averaging 2.5 points while making a combined 2-for-16 shots (12.5%) – including going 0-for-8 on three-pointers – through two games. He did hit 1-of-2 free throws in the final seconds Wednesday night when the Sixers beat the Jazz 86-82 in Utah. He is still adjusting to the NBA game and must also show he can defend perimeter players at that level. “I think for a lot of rookies, especially ones who come straight out of college, the NBA line can be a little bit of an adjustment,” Sixers Summer League coach Tyler Lashbrook told the Philadelphia Inquirer. “So for him to miss shots like this is not concerning for us. We are still encouraging him to let them go and find them in a bunch of different ways. “We got no doubt that he’s going to end up making them. But the thing that we were proud of was he was able to stay on the floor despite that because of his defense.” Champagnie has a chip on his shoulder after going undrafted — as was the case with his brother — but he knows it’s about taking the long view and is inspired by players like Fred VanVleet, who went undrafted out of Wichita State and ultimately won an NBA title with the Raptors. “It’s not about getting there, it’s about sticking there,” Julian said of the NBA. “So just showing them that I’m worth the risk and I’m here to work.” Follow Adam Zagoria on Twitter Follow ZAGSBLOGHoops on Instagram And Like ZAGS on Facebook