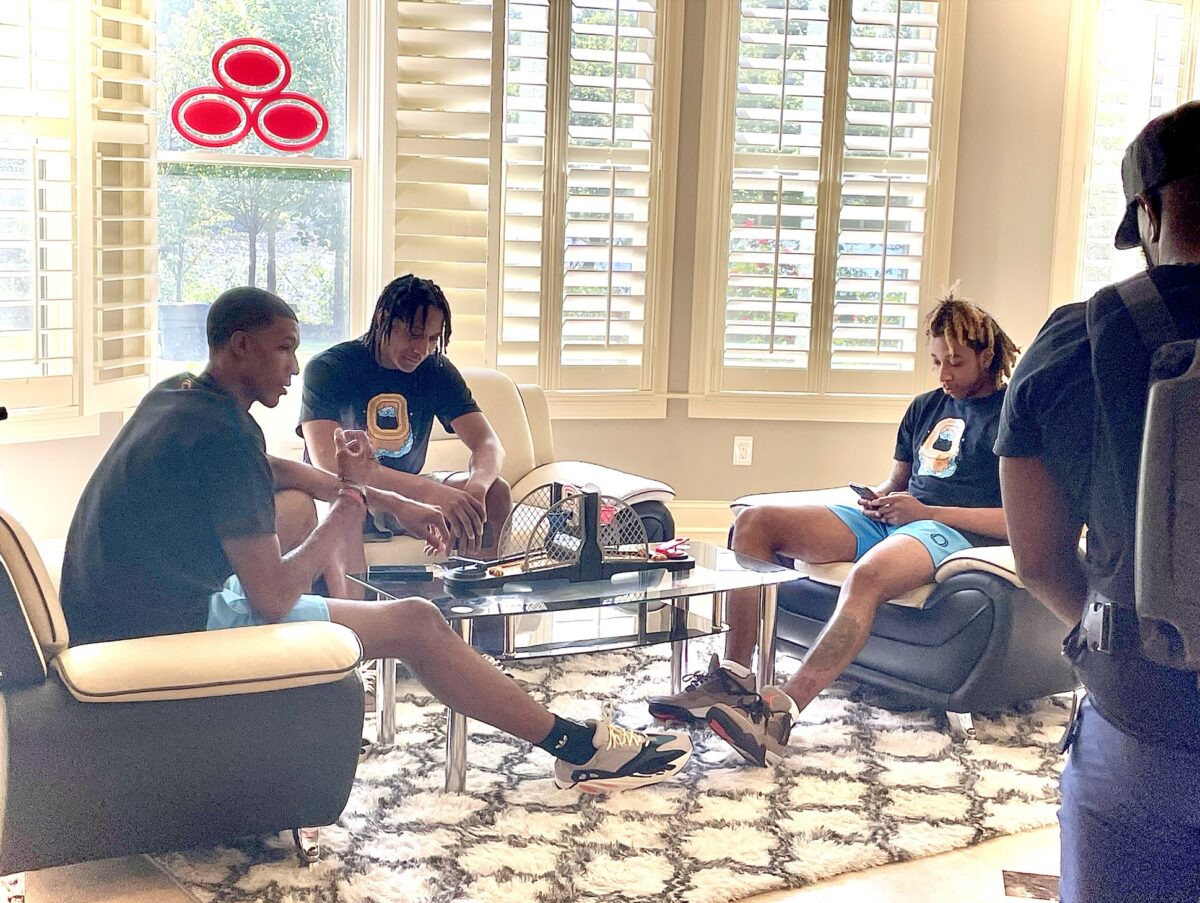 By JACOB POLACHECK ATLANTA – Ahead of the 2022 NBA Draft, a trio of SEC stars joined forces to film an exclusive “Draft House” segment presented by State Farm. Auburn forward Jabari Smith, Kentucky guard TyTy Washington and Alabama guard JD Davison met up in Atlanta on June 4 set to compete in a myriad of fun events, including pop-a-shot and an outdoor shooting competition with a twist. In the first event, the three stars battle in a pop-a-shot competition with 60 seconds on the clock. “I’m not gonna aim, I’m just getting my reps up,” Washington remarks as the competition begins. At the end of the first round, Davison leads with 45 points, Washington just behind with 41 points and Smith in last with 35 points. Fighting it out in the finals, Davison pulls away with 38 points to Washington’s 26, taking home the crown in the first event. As the first event closes out, Smith notices the expansive film room across the hall. “We’re watching film? Are we gonna watch me drop 25 points on Bama?” Smith jokes to Davison in reference to his 25-point, 7-rebound game against Alabama on January 11. Smith, the 6-foot-10, 220-pound forward out of Fayetteville, GA, is projected by many to be the top overall pick in Thursday’s draft. “Yeah, I think I should be,” Smith said when asked about the potential of being the draft’s top choice. “With how it’s shaping out and everything, it’s a coin toss, but I think I’m deserving of it and I’m ready to see how it unfolds.” During the 2021-22 season, Smith averaged 16.9 points, 7.4 rebounds and 2.0 assists per game while shooting 42.9 percent from the field and 42.0 percent from three. “I can do a lot on the floor – pass, defend, rebound – anything a team needs me to do, I feel like I can do it,” he said. “That’s what I bring to a team –  a winning mindset and versatility.” Smith said that it’s “hard to get away from” the numerous mock drafts being posted online. “You’ll see it everywhere,” he said. “I look at it, but it doesn’t really mean too much for me.” Meanwhile for Washington, the 6-foot-3, 197-pound guard out of Phoenix, AZ, said his friends from back home are constantly tagging him in the latest mocks. “I look at it, but like (Jabari) said, I don’t really pay attention to it that much,” he said. Davison, the 6-foot-3, 195-pound guard out of Letohatchee, AL, echoed a similar sentiment. “That’s something you can’t control,” he said. Washington averaged 12.5 points, 3.5 rebounds and 3.9 assists in his lone season at Kentucky, saying he brings a scoring and passing ability to the next level. “I feel like I play basketball the right way,” Washington said. “It doesn’t matter where I’m playing or who I’m playing with, I always do what’s required. I feel like I make the right plays all the time and I never try to get out of my body.” Davison averaged 8.5 points, 4.8 rebounds and 4.3 assists during his freshman season at Alabama, modeling his game after a pair of NBA stars. “I’ve been watching a lot of film on the NBA, including guys like Ja Morant and Russell Westbrook,” he said. “We’re the same archetype and have the same body.” After the pop-a-shot competition, the group moves outside for a shooting competition, but the twist is that each player is required to pick out a pair of gloves randomly to shoot with. Smith is equipped with a baseball mitt and a oven mitt, Washington gets a lacrosse glove and an oven mitt, while Davison perhaps gets the best draw with a football glove and a cleaning glove. “I don’t play baseball so you’re gonna have to help me out with this,” Smith said. Each participant has 60 seconds to compete and after Smith only scores one point in his try, Washington and Davison advance to the finals. In the finals, both men shoot at the same time and the first to make it takes home the title. After Davison won the pop-a-shot competition, Washington gets his revenge, winning the day’s last event. “The house is crazy, so it was good to get in here and have some fun,” Smith said after the event. The video shoot was a reunion of sorts for all three athletes as Smith and Washington were teammates together at the Pangos All-American Camp in high school and Washington and Davison were teammates at the Iverson Classic. “I feel like the game of basketball can always bring friendships longer than when you play,” Washington said. “I’m pretty sure us three are going to be connected for life. I’m one call away. I feel like if I ever need anything, I can call either of them. It’s just cool to bond with them off the court.” The full show is set to premiere on Sunday, July 2. Follow Jacob Polacheck on Twitter Follow Adam Zagoria on Twitter Follow ZAGSBLOGHoops on Instagram And Like ZAGS on Facebook