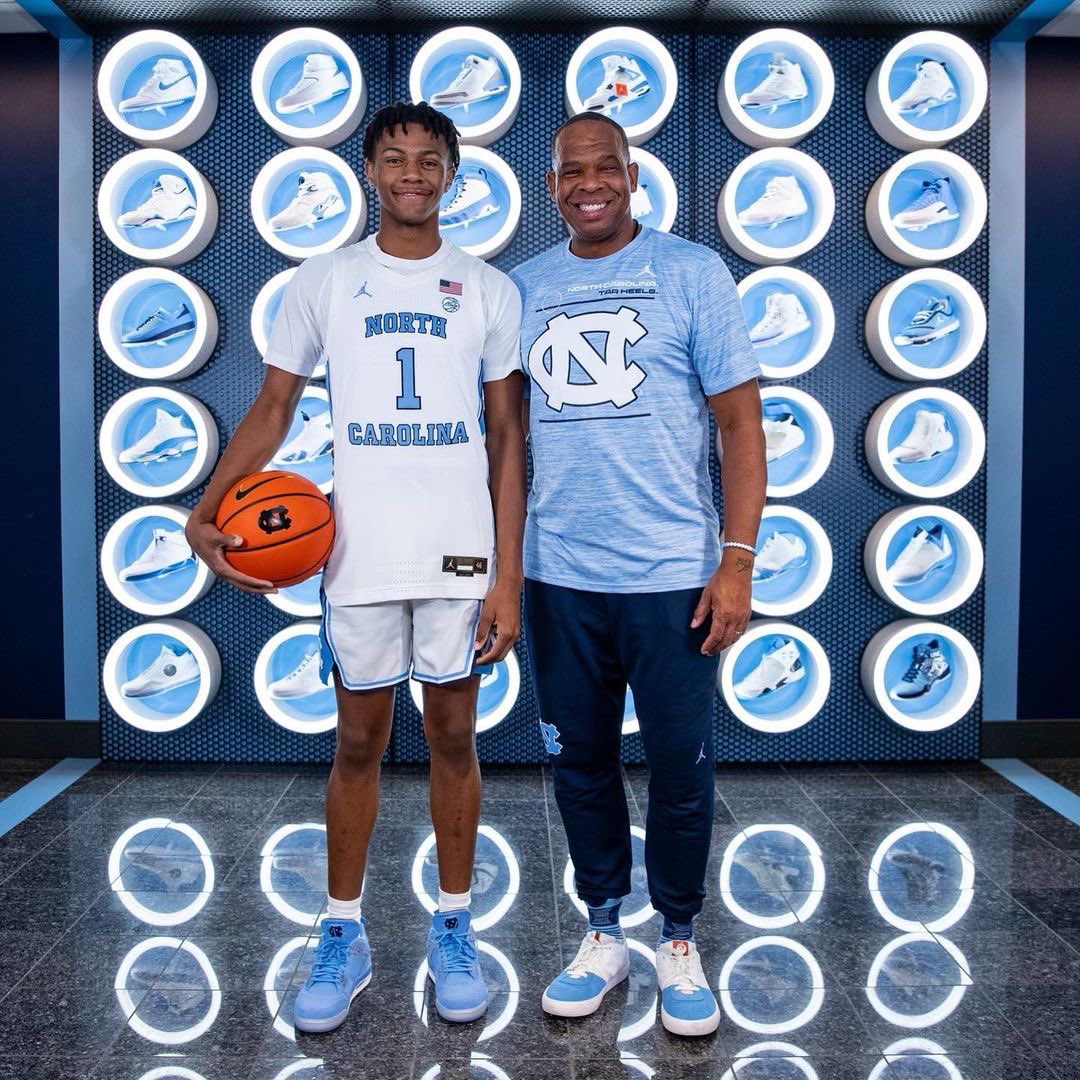 By ZACH SMART ORLANDO, Fla. — With North Carolina head coach Hubert Davis and Tar Heels assistant coach Sean May sitting courtside at Disney’s ESPN World Wide Of Sports Complex Friday, Class of 2023 Tar Heels commit Simeon Wilcher displayed a sustained relentlessness throughout the NY Rens tight, dizzying loss to The Family. Wilcher, who engineered a fourth quarter comeback bid with consecutive knifing drives for layups, showed his ability to create space and finish hard around the rim in crafty and ambidextrous fashion.  The high octane, 6-foot-4 Roselle (N.J.) Catholic guard engineered the Rens uptempo attack throughout, registering his presence as a stop-and-go scorer with a sheer nose for the rim. The NJ.com Boys’ Basketball Player of the Year is coming off leading Roselle Catholic to its fourth New Jersey Tournament of Champions title last month over D.J. Wagner and Camden. Rens teammate Ty-laur Johnson, the Brooklyn native who attained the 1,000-point milestone at St. Benedict’s Prep as a junior, is another gritty guard at Rens coach Andy Borman’s disposal. The rugged and speedy 6-foot, 160-pound point guard showed stout on-ball defensive tenacity throughout. A poised, high level shot maker, Johnson holds offers from the likes of DePaul, Memphis, St. John’s, Seton Hall, Pittsburgh, and a bevy of others. He earned his first ever Division 1 offer from St. John’s in the fall of 2020.  “My focus is really to just do whatever it takes to help my team win,” Johnson said. “Really, I’ve got to do whatever I can to help my team win. That’s my focus.”  What does Johnson pinpoint as the finest point of his hardwood trade? “Definitely my play-making, said Johnson, who was recently named the Jersey Sports Zone’s 2022 Prep Player of the Year and was instrumental in guiding St. Benedict’s to a Prep A Championship.  “I can score when I need to score, so really just decision making.” Johnson grew up in Bedford-Stuyvesant. Borman describes him as a “tough junkyard NYC point guard.” Often entrenched in hyper-intense battles with the aforementioned UNC-bound Wilcher in practice, Johnson relishes playing alongside him. It seems to ratchet up the competition level, which translates to a hothouse AAU stage of this magnitude. “Whoever is hot, we want to go to,” Johnson said. “If (Wilcher) is feeling it, I’m getting him the ball.” Johnson cited Providence, VCU, Pittsburgh, and Seton Hall– with newly hired head coach Shaheen Holloway fresh off leading St. Peter’s to a historic NCAA tournament Elite 8 run–as the four programs in most consistent pursuit.  “I’m open to everybody right now,” Johnson said. OLD FACES IN NEW PLACES -The scene played out like an episode of “changing places” in Central Florida on Friday night. Former Seton Hall coach Kevin Willard was one of the first coaches in the door at the ESPN World Wide Of Sports’ Advent Health Arena with a bright Maryland shirt on.  New Rhode Island head coach Archie Miller and assistant coach Duane Woodward (previously at Seton Hall under Willard) donned Rams gear as they made their way into the gym.  Ex-Miami associate head coach Chris Caputo was draped in a George Washington University hoodie.  Fresh off a berth in the NCAA title game loss to Kansas Monday night in New Orleans, UNC’s Davis arrived at the gym roughly 35 minutes prior to the event’s 6 p.m. start time. Georgetown coach Patrick Ewing and Michigan’s Juwan Howard were also among the first coaches to arrive at EYBL Session 1 event. Follow Zach Smart on Twitter Follow Adam Zagoria on Twitter Follow ZAGSBLOGHoops on Instagram And Like ZAGS on Facebook