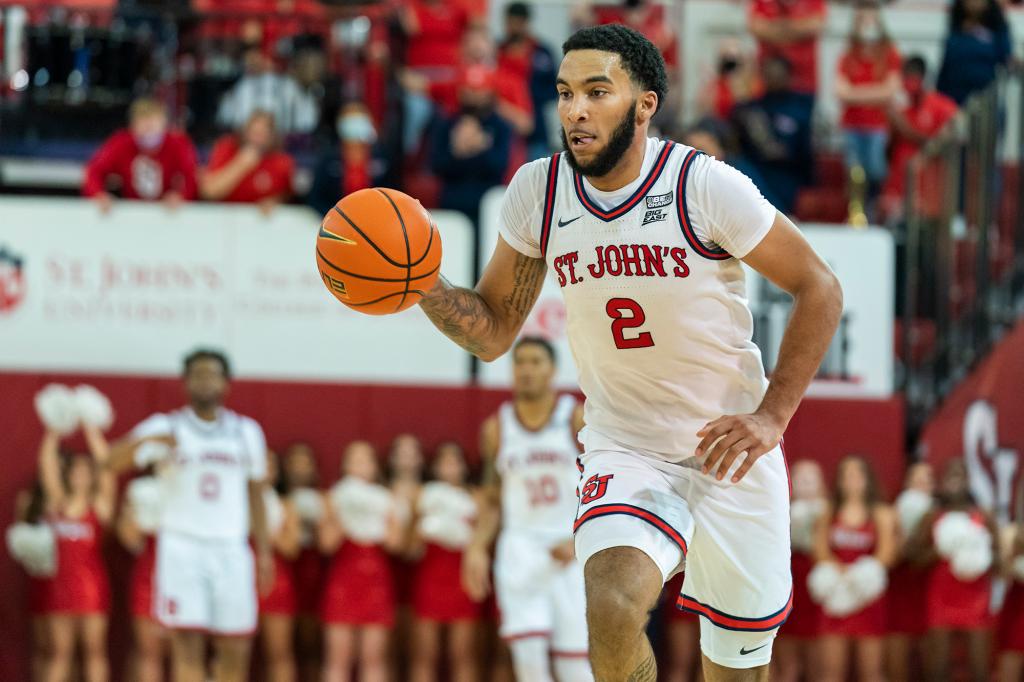 St. John’s junior Julian Champagnie, a two-time All-BIG EAST First Team honoree, announced Saturday that he intends to forego the remainder of his collegiate eligibility by entering the 2022 NBA Draft and hiring an agent. The Brooklyn native will complete his St. John’s career ranked 20th on the program’s career scoring list with 1,408 points (16.0 ppg) in his three seasons leading the Red Storm. Champagnie also finished top-six all-time in career free-throw percentage (6th, 81.5 pct) and 3-point field goals made (4th, 149) while pulling down 598 rebounds (6.8 rpg), good enough for 32nd all-time at St. John’s. “Words can’t describe what Julian has meant to our basketball program since he arrived on campus as a 17-year-old,” said St. John’s Head Coach Mike Anderson. “Over the past three years, it has been an honor to watch Julian grow into the fine young man and basketball player he is today. Julian put in the work and gave us everything we asked of him. We understand this is his time to take that next step and pursue his dream of playing in the NBA. We wish him the very best and he will forever be part of our St. John’s Basketball Family.” One of the most prolific scorers in program history, Champagnie started 81 of his 88 appearances with the Johnnies. He reached double figures 68 times, including 40 consecutive games spanning his sophomore and junior seasons, with 28 20-point performances and four 30-point efforts. Champagnie is part of an elite fraternity at St. John’s, becoming one of just seven Johnnies to garner All-BIG EAST First Team honors twice, etching his name in the St. John’s record book alongside the likes of Chris Mullin, Mark Jackson, Malik Sealy, Marcus Hatten, D’Angelo Harrison and Shamorie Ponds. “First and foremost, I would like to thank Coach Anderson, our entire staff, my teammates and the University community for all of the support for the past three years,” said Champagnie. “Playing in the NBA has been a lifelong dream. After discussion with my family and those close to me, I believe now is the best time to begin that journey. “Growing up, St. John’s was a place that always felt like home, but over the past three years it officially became my home and gave me so much opportunity to develop as a person and a player. I wouldn’t change my decision to be part of this great program for anything. I am a Johnnie for life.” This past season, Champagnie averaged 19.2 points in 31 appearances, good enough for second in the BIG EAST and 35th in the country in scoring.  He reached double figures 26 times with 15 efforts of 20-plus points and a trio of 30-point performances.  In BIG EAST Tournament action, the Brooklyn native scored 26 points in the team’s opening win over DePaul before adding 23 in a one-point quarterfinal loss to eventual champion Villanova.  Not only a prolific scorer, Champagnie also led the team with 6.6 boards per outing while ranking second in the league in steals with 2.0 per game and 10th with 1.1 blocks per contest.  He recorded four of his 15 career double-doubles in 2021-22.  As a sophomore in 2020-21, Champagnie led the conference and ranked 25th nationally in scoring with 19.8 points per game and garnered the BIG EAST’s Most Improved Player Award. He also became just the fourth player in program history to lead the league in scoring over the course of a conference season, joining Mullin (1983-84), Walter Berry (1985-86) and Hatten (2001-02). In 2019-20, Champagnie was named to the BIG EAST All-Freshman Team and was named All-Met Rookie of the Year by the Metropolitan Basketball Writers Association. He started 26 of 32 appearances as a freshman, averaging 9.9 points and led the team with 6.5 rebounds per game. This past season, Champagnie was one of five finalists for the 2022 Julius Erving Award, presented annually by the Naismith Memorial Basketball Hall of Fame to the nation’s top small forward.  This release was provided via St. Johns Follow Adam Zagoria on Twitter Follow ZAGSBLOGHoops on Instagram And Like ZAGS on Facebook