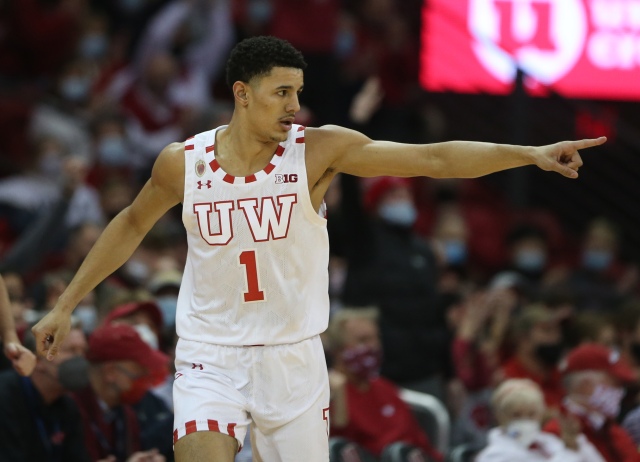 By CHARLIE PARENT The Purdue-Wisconsin matchup on Tuesday night featured two of the biggest stars in men’s college basketball in Wisconsin’s Johnny Davis and Purdue’s Jaden Ivey. The 6-foot-4 Ivey is projected by ESPN.com to go No. 4 in this summer’s NBA Draft (to the Pacers), while the 6-5 Davis is projected at No. 7 (to the Knicks). In the end, Davis, went for 16 points, eight boards and one assist and freshman Chucky Hepbern hit the game-winning 3-pointer as Wisconsin won, 70-67, to earn a share of the Big Ten regular-season title at electric Kohl Center. Ivey finished the night with a game-high 22 points on 8-of-15 shooting. Both players earlier Tuesday were named finalists for the Jerry West Shooting Guard of the Year Award. Back on Jan. 4, Davis put up acareer-high 37 points in Wisconsin’s 74-69 road victory over Purdue, while Ivey had 14. Tuesday’s game was a bit different. Both stars got off to a very slow start. Davis shot just 1-of-4 from the field by halftime, with Ivey going 2-for-6. After the break, both players started to heat up. Davis excelled as the pick-and-roll ball-handler, hitting smooth mid-range jumpers. He also scored some tough and-ones at the basket to edge Wisconsin in front. Ivey and the rest of the Boilermakers, though, are not new to comebacks, and Ivey was huge in chipping away through most of the half. Ivey hit a big three, followed it up with a nice reverse layup, and finally added one of his signature acrobatic finishes for a tough and-one to put Purdue right back in it. Around the six-minute mark in the game, Ivey slowed down. He appeared to hesitate, but his teammates, such as Zach Edey, helped keep Purdue within range. Davis also slowed around this time but continued to guard his childhood friend Ivey heavily down the wire. Once it hit the two-minute mark, with the game at 63-60, Ivey took matters into his own hands. The Purdue superstar hit a clutch running, contested, floated to put Purdue down one. Then, following a Wisconsin bucket, Ivey came back down the floor and exploded by his defender for the left-handed finish. Wisconsin would not be deterred by this, though. Up one and with the ball, head coach Greg Gard drew up a pick and roll for Davis. Davis took one of the toughest shots imaginable and banked it in to put the Badgers up three. This would not be it for Ivey, though. After a Brad Davidson missed a free throw that would’ve iced the game, Ivey came down in transition and made an NBA-level pull-up three-pointer. Ivey’s magic would end on the other end as freshman guard Hepburn hit a step-back three over him with 1.5 seconds to seal the game for Wisconsin. Thanks to Hepburn’s heroics, Wisconsin clinched a share of the Big 10 title for the 20th time in program history. A win against 9-21 Nebraska would mean the Badgers win the conference outright in a season where the preseason polls predicted them to finish 10th in the Big 10. Follow Charlie on Twitter Follow Adam Zagoria on Twitter Follow ZAGSBLOGHoops on Instagram And Like ZAGS on Facebook