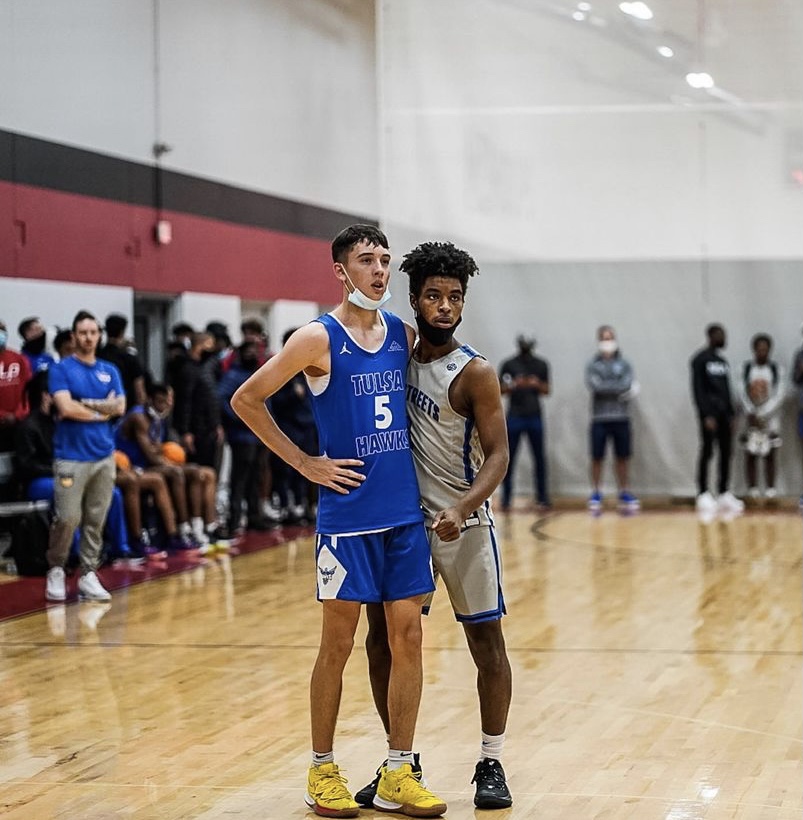 By TOBIAS BASS After going from relatively unknown prospect to the nation’s No. 76 overall prospect, four-star shooting guard Parker Friedrichsen is eying official visits. “All I can do is keep working on my craft and hope people start to pay attention,” Friedrichsen said. “We have a lot of great basketball players in the state (of Oklahoma). I think the culture is improving as the great players continue to get recognized.” The 6-foot-4, 170-pound shooting guard from Bixby (OK) and the Tulsa Hawks AAU Program, took unofficial visits to Tulsa, Oklahoma State and Oklahoma over the summer with plans to take official visits to Purdue (Oct. 1-3), Iowa (Oct. 15-17) and Nebraska (Oct. 29-31). He also picked up offers from high-major programs Illinois, Virginia Tech, and Purdue with interest from Virginia, Butler, Creighton, Ole Miss, Arkansas, Missouri, Utah, George Washington and Iowa State. He broke down each school:  Tulsa: “TU is a great smaller private school in my hometown. They play in a really good conference and have gotten a few guys to the league. Coach Frank Haith and the rest of the staff think I fit their program due to my playmaking abilities.” Oklahoma State: “I’m building a great relationship with coach Mike Boynton and coach Keiton Page. They have a lot of athletic guards and I feel like I can help them stretch the floor. OSU had a good season last year and I’m looking forward to watching them make a run again this year.” Oklahoma: “Coach Porter Moser is a proven winner because of what he did at Loyola-Chicago. He and his staff bring a lot of energy to OU and his system fits what I do best- playing in transition. I know he’s ready to make a run at Oklahoma and feels I could be a contributor to their future success.” Iowa: “Coach Fran McCaffery and coach Billy Taylor reach out a lot. Obviously, Iowa is a strong program in the Big Ten. They like their shooters. I’m looking forward to my official visit there next month.” Nebraska: “My dad grew up in Nebraska and this offer was big for my family. I have a ton of relatives that live there and the Huskers are a big deal. Coach Fred Hoiberg and his staff have a lot of experience at the next level and I’m excited they believe in me.” Purdue: “This will be my first official visit. Coach Matt Painter saw me play in Indy and we talk often. I also have a great relationship with coach Paul Lusk. They consistently make the NCAA tourney and that is one of my college goals.”  With official visits on the horizon, Friedrichsen is looking for the right fit with the right people. “Colleges are just buildings,” he said. “What matters are the people on the inside. I’m not concerned with high major or low major as much as just finding a place that wants me and believes in me and surrounded by guys with my same competitive mentality.” Over the summer, Friedrichsen showed off his ball-handling and leadership, earning a spot on the national radar. “I think coaches saw my skill, my patience and my leadership on the floor,” he said. “My overall game is evolving and I’m not  really known as a straight up shooter anymore.” After improving his scoring average by more than 10 points from freshman to sophomore year, Friedrichsen enters his junior year continually chasing the shadow of a former Oklahoma superstar. “I’m trying to catch Trae Young numbers. He pretty much set the bar in Oklahoma and I’m trying to reach it if not break it,” Friedrichsen said. “I just want to continue to get better.” Due to the pandemic, Friedrichsen has been enrolled in primarily online classes, giving him more flexibility to get in the gym and improve his craft. “I just love to work,” he said. “I can’t imagine any other life than being in the gym. I have a great circle of people around me who really push me to succeed.” Follow Tobias Bass on Twitter Follow Adam Zagoria on Twitter Follow ZAGSBLOGHoops on Instagram And Like ZAGS on Facebook

Class of '22 guard Nick Smith down to 4 schools